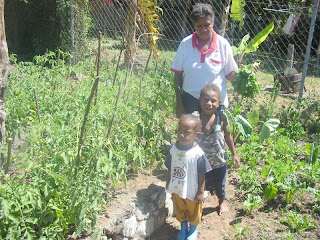 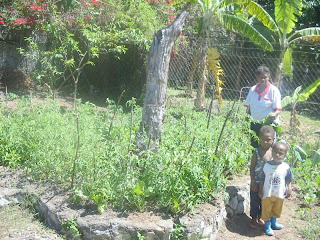 Picture 1: My late wife Hula and our two sons Gedi (front) and Malum Jr in our backyard veggie garden 2004

Picture 2: Hula and the boys picking up silver beet and tomatoes for lunch

All forms of gardening are rewarding and satisfying.

But vegetable gardening, largely because the gardener can be in charge of the whole operation from seed collection to consumption, is possibly the most-rewarding.

In addition, well-grown home-produced vegetables cannot be matched for flavour and nutritional value.

And with care, considerable savings – especially in a city like – in the family’s food budget are possible.

, unlike a place like Goroka – where you can grow all types of succulent, mouth watering vegetables – has an arid year round climate.

This is apart from a brief respite during the December to March period, when the rain comes down in buckets and vegetables – especially corn – abound all over the capital city.

These create queues at many gardening shops in , such as major agricultural supplier Brian Bell.

As early as 7am, a long line of people gather in front of the at Boroko and buy their supplies of corn seeds.

During this period, corn gardens can be seen all over the city, including precarious hillsides.

In Goroka, where we lived for almost five years from 1998 to 2002, my late wife and I grew our own potatoes, carrots, broccoli, cabbages, tomatoes, and a whole range of other highlands vegetables.

All we need to buy was some steak (or in real style, lamb flaps) and coleslaw for a salad, and that’s all that we needed for a delicious meal.

When we moved to Six-Mile in the capital a couple of years ago, we found that there was a nice big backyard for the kids to play, and of course, to try out for a garden.

We borrowed a mattock from our neighbours and started breaking the hard, rocky soil.

After that, into the nursery went tomatoes, silverbeet, Chinese cabbage, cabbage and chillies.

Regular watering and compost, and after about two months, we started to reap the fruits of our harvest: tubs of tomatoes, silverbeet, Chinese cabbage, chillies and other garden-fresh produce.

We would have made a killing had we gone to market, but this was strictly for family consumption.

For my two sons, it was a great way of teaching them about gardening and agriculture.

The missus didn’t have to run to the market looking for fresh vegetables.

For me, it was a great way to relax after work as well as at weekends talking to my vegetables.

Try it: you’ll really reap what you sow!