The extraordinary life of Ian Boden 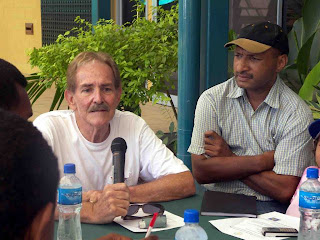 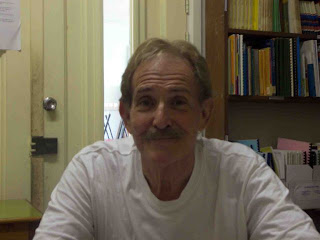 When The National’s news editor Jacqueline Kapigeno told me the sad news of the passing of Ian Boden early this morning, a deep and profound sense of loss went through my heart, a feeling on behalf of all the people of our beloved country .

Boden’s is a story that surpasses 40 years in Papua New Guinea, starting as a young Australian Broadcasting Broadcaster in Rabaul in 1964, seeing the birth of the National Broadcasting Commission in 1973, working with a fledgling public service after independence in 1975, working through the dark days of the Bougainville Crisis, starting with a brand new daily newspaper called The National and bringing joy to thousands of people the world over with his writing style, and teaching young Papua New Guineans about journalism until the day he died.

I told Jacqui that earlier this year, while at in Madang, he gave me the rare opportunity to do an in-depth interview with him, however, asked me not to write anything a short while later, as he felt it would be an orbituary.

So I threw my notebook into my cabinet, and forgot all about it, until the news of the passing of this great scribe, broadcaster, thespian and journalist trainer extraordinaire.

I now realise that in fact, Ian gave me the last chance anyone has had to interview him, and that he had granted me an unsual privilege

Read any of the editorials he has written for The National over the last 15 years and you will see that they are unmatched for content and writing style.

His Column 1 has an international following through the online pages of The National.

He was the mainstay of National Broadcasting Commission’s popular radio dramas in the 1970’s and 1980’s, and he was actively involved with the Port Moresby Arts Theatre.

“I came as a relieving radio announcer for three months,” he told me in that last fateful interview in Madang.

“I was supposed to be going to Rabaul.

“I did go to Rabaul, but from August to Christmas I was in , and then I went to Rabaul.

“9RB (radio station) was the furthest-flung station of the ABC empire.

“I lived in Rabaul for the next five years.

“It was the kind of station where you had to be a jack-of-all-trades, from playing records to fine tuning broadcasts, in an ad hoc way trying to train PNG staff, something that had started earlier.

“We had quite a collection of Tolai announcers, young guys.

“At least three of them are still alive.

“One of them is Anton Kaut, he was probably the youngest.

“The others were Jack Ainui, Robin Popat and Nelson Bale.

“They were the core of the presenting staff outside of .

“Outside of , there was no ABC station apart from Rabaul.

“The ABC was housed in a Nissan Hut left over from the Second World War, which is still there in Rabaul.

“That building has been everything from a copra storage shed to a Catholic church.

“At the same time in town there was a DIES (Department of Information & Extension Services) station as well.

“Ninety per cent of broadcast was in English.

“The logic behind the station was to provide news and entertainment for all the dimdims (expatriates) in the area who ran plantations.

“There was quite a substantial number of Papua New Guineans in what was substantially a very small radio station.

“We had programmes like Blue Hills which ran twice a day, classical music and religious programmes.

“It was very much European-oriented.

“Sports tended to be European-oriented such as football, cricket, bowls and croquet.

“The town (Rabaul) itself was like something out of a page by Somerset Maugham.

“It was quite remarkable.

“The population was divided into three clearly-defined groups: Australians, Ambonese and Chinese.

“They inhabited what became known as .

“It was an interesting town.

“It had everything going for it

“It had a couple of cinemas: Native Cinema and Palms Cinema.

“There were a lot of expat clubs.

“New Guinea Club, for example, had been started by a German.

“We were in a hostel on the top of Namanula Hill.

“That became the ABC Hostel.

“I built myself a bush material house, and lived there: ‘Boden’s gone tropo’.

“There were so many eccentric people in Rabaul.

“They were straight from the pages of a novel.”

In 1969, Boden got married to Delma from Raluana village in the old registry office in Rabaul, and was transferred to by the ABC.

“I continued with the ABC until 1973, which was self government, at which point a number of us chose to remain on secondment to the NBC,” he continues.

“In fact, I was on the committee that set up the NBC with people like Luke Sela, Sam Piniau and quite a handful of individuals from the ABC.

“If my memories are correct, we started broadcasting on December 1st, 1973.

“The thing with the NBC was that I had moved away from broadcasting.

“I became a liaison officer between the provincial radio stations and the national station.

“In 1975, immediately after independence, I flew to and worked for the BBC.

“That came about because I was invited on a further secondment.

“They (BBC) broadcast from to the South Pacific.

“So I found myself going to .

“I was there for 14 months, working for BBC World Service.

“Then, more or less for family reasons, I came back (to PNG).

“By this time we had four children.

“I became principal training officer of the NBC.

“That’s how I came into a training role with people like Justin Kili, Memafu Kapera, so on and so on.

“They were already accomplished broadcasters but there was ongoing training.

“There was very good training at that time.

“For one person from each division of provincial government, we could train them to be good announcers, for purely the interests of their own department.

“By the time we left at the end of three weeks, we had reasonable competent announcers.

“Being radio, this meant that we could reach very remote areas.

“It was a two-way exercise.

“We reached out to them but we also monitored the reaction.

“I was offered a special project within the very-oddly named Department of Public Service Commission.

“There was a need for this particular project to be done.

“Then they asked me to be ‘Director of Information’’ and acted as a provider of information and statistics for anyone in the PSC.”

In 1986, the government tried to reconstruct the public service, under then Public Service Minister the late Sir Anthony Siaguru, and Ian Boden was actively behind the scenes.

In 1988, he was asked to be Press Secretary to Prime Minister Sir Rabbie Namaliu, at a time when the Bouganville Crisis was just about to erupt.

“These were very difficult times, because in 1989, that was the beginning of the conflict,” Boden recalls.

“It was obvious that trouble was brewing, and of course, it got worse and worse.

“Bougainville Copper Limited ceased to operate, the Commonwealth Heads of Government Meeting was in , (Sir) Rabbie asked me to go to and act as a source of information for him.

“I went and a lot of the BRA and other people were aware that I was around.

“I had some meetings with them.

“There were 20 dead people at one time and they maintained that these people had been killed by the PNG Defence Force.

“They asked me to investigate.

“I did investigate but it was extremely difficult.

“It was also difficult to get information back to (Sir) Rabbie.

“I traveled back and forth and was aware of terrible atrocities.

“I went on one occasion with a group of international observers and were to be witness to ‘laying down of arms’.

“An Air Niugini aircraft was sent to pick us up.

“At Kieta, we traveled from there by convoy to what had been .

“We were stopped at several points along the way.

“One of our numbers, journalist Wally Hiambohn, was pulled out and severely beaten.

“My role in that (Bouganville Crisis) was very minor.

“The election was in 1992 and (Sir) Rabbie lost out by the casting vote of Bill Skate as Speaker.”

Boden remain in politics until the formation of the brand-new The National newspaper in November 1993, when he joined as executive editor.

“I had written a rather sharp editorial at that time criticising the prime minister of the day.

Boden talks passionately about , the country that he has come to call home, as well as the future of journalism in this country.

“It’s a place that has become my home,” he says.

“I’ve developed a great affection for and its people and the direction that the country can go in.

“I have to say that after all these years, nothing has changed (for me).

“I still feel the same way about the country and its people.

“I know there are problems.

“I think we become bogged down and we fail to see the very real achievements that are being made.”

I ended my interview with Boden by asking him about and his decision to go there and teach journalism.

“I think, at my age, that it’s great to have the opportunity to pass on whatever skills you might have and watch young tertiary students seize the chance and rapidly become competent media personnel.

“We have people just about anywhere and everywhere.

“We have people in the mainstream media, in NGOs, government information units, large-scale resource companies like Porgera and Lihir and in the realm of corporate enterprise and statutory bodies.

“I suppose the ultimate goal of young Papua New Guineans is to see personal development opportunities, and through their contributions, ensure the development of the country.”