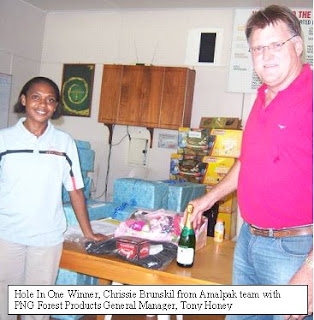 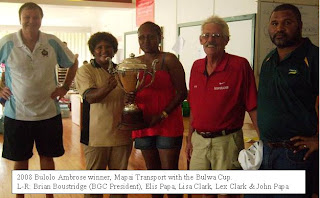 The annual PNG Forest Products Bulolo Ambrose three-day golf event in Bulolo last weekend was highlighted by a Hole in One by Chrissie Brunskil of the Amalpack team from Lae.

The annual three-day event held in fine and sunny weather was won by Lae-based Mapai Transport No.1 team, with DJ Wheels from Goroka second and Unitech No.3 third.

The Bulwa Trophy, originally donated in perpetuity to Bulolo Club in 1964 to commemorate the former Bulwa Club, was presented to winners Mapai Transport by president Brian Boustridge, who acknowledged the historical nature of the Bulolo Golf Club.

In his address, Bulolo Club patron Toney Honey acknowledged the growing list of sponsors from within PNG and overseas, without whom the Ambrose would not be what it is.

He congratulated the club on the work put in by a dedicated team of volunteers and welcomed the large number of players who annually make the Bulolo Ambrose such a success.

He also welcomed the large number of new players taking part, which was also good for the future of the game in Bulolo.

The Bulolo Ambrose Weekend is such a popular and sociable event that teams from , , Goroka and Ramu and Lae are often joined by players from , NZ, and .