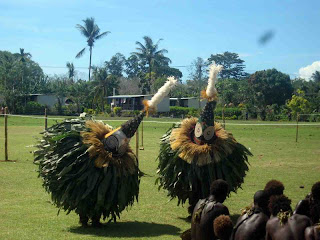 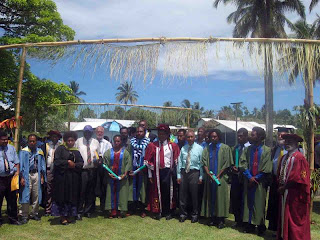 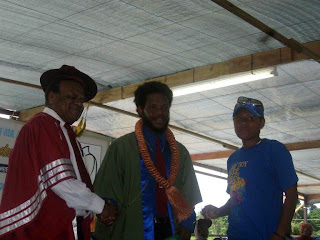 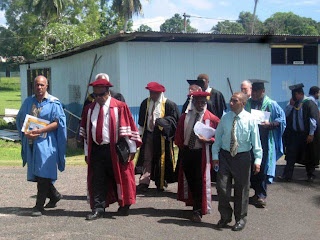 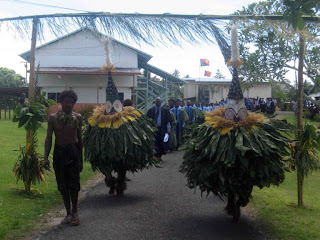 History was made at the in Kavieng last Friday  when the first-ever diploma in fisheries and marine resource management students graduated.

It was the result of a collaborative effort between the National Fisheries Authority, and the German Development Assistance Agency GTZ that has seen this programme bear fruit.

“Firstly,” he said, “seven young people will be graduating to take their place in the fisheries and marine resources sector, which is one of the most-important sectors in the Pacific region.

“Secondly, it has brought together professionals from , PNG and the Pacific nations to enable it to get this far.

“These men and women must be complimented for the foresight and dedication provided to allow the first graduation to occur.

“The third occasion is for this province, , to host a university graduation ceremony.

“This compliments the fourth achievement of this occasion which is the further expansion of the university into the region as desired by the university council, of which Governor Sir Julius Chan himself in his capacity as the then chancellor helped lay the foundation.”

Sir Rabbie said that fisheries and marine resources were vital commodities for PNG and the UoV, in partnership with the NFA, could stand tall for the contribution they were making to the region and the international community.

“Three years ago,” he said, “there were many critics who thought otherwise about this programme.

“I am indeed happy to see that notwithstanding some obstacles, in conjunction with GTZ and the National Fisheries Authority, is now graduating its first batch of trained technical scientists who have a job ahead.

“When the other seven students move on to the main campus at Vudal in to complete their degrees, the full cycle would have been achieved and this programme can be reviewed to assess its success.”

Sir Julius said UoV could have a greater impact and role in PNG and the Pacific as indicated by interest from neighbouring .

He said it was his vision that the NFC could follow suit and one day become a university of its own.

“With foresight,” Sir Julius said, “I hope this college, which I helped launch 20 years ago, will one day excel beyond diplomas, degrees and become a campus of its own.

The need to re-introduce the professional education program in the fisheries discipline at the university tertiary level has been very much triggered by the increase growth in investment in the PNG domestic fishing industry.

The course was developed in a consultative process between the NFA including NFC, the UoV, the University of Papua New Guinea (UPNG) and GTZ.

GTZ contributed to the program by putting together subjects relevant for the degree and diploma program while the rest was done by NFC, UOV and UPNG.

A technical working committee was established since 2006 to annually review progress and work plans for curriculum development and coordination of the program.

Diploma and Degree in Fisheries and Marine Resource Management is a three to four years program respectively and courses are offered both at the of , campus and National Fisheries College-Kavieng.

Year 1 and 4 students are enrolled at UOV and the second and third years’ courses are conducted at NFC in Kavieng.