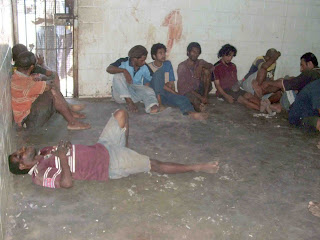 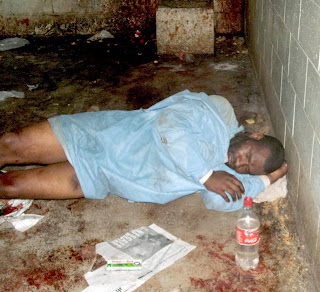 William Kapis in custody at the Boroko Police Station cell after being caught and shot on July 18 this year. 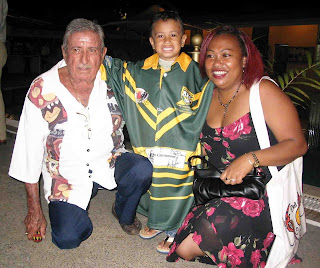 Sir George Constantinou (left) with his young family before his brutal murder, which shocked Papua New Guinea and the world.

By CLIFFORD FAIPARIK
Armed robberies of Bank South Pacific branches in Kerema, Madang and Kimbe and the killing of Sir George Constantinou has made an infamous scar for this year.
Papua New Guineans will never forget these incidents, just like the Americans will never forget the assassination of their President John F Kennedy on November 22, 1963, in Dallas, Texas.
These separated incidents were done by intelligence criminals (for BSP robberies) and just petty criminals (for the late Constantinou’s murder)
The robberies of the BSP branches have woken Papua New Guineans up to face the latest trend of violent crime involving armed robbery.
This trend involves kidnapping and demanding ransom.
The trend is also made easier by the use of the latest communication technology to mobilise manpower, resources, and logistics to execute shrewd tactics –that is the use of the mobile phone.
Currently, the main suspect William Kapis Nanua and his associates are facing various charges in connection with the robberies before the court, and are being remanded at Bomana prison outside Port Moresby.
This review will not detail the robberies of Madang and Kimbe but only for Kerema as it was the first branch to be hit.
Also similar tactics were used to organise the other BSP branch robberies.
Gulf police suspect that the former Kerema branch manager, who has now been charged, was involved in robbing K830, 498.45 last May 17 from the bank.
Noah Karo, 49, from Hula village, Central province was accused of the robbery by organising with Kapis, Jack Frost Kivare and Ivan Kaini for his daughter, grandson, son-in-law and three sons to be picked up at Five-Mile and to be kept as hostage in an undisclosed place in Port Moresby last May 15.
Police alleged that Nanua, Kivare and Kaini then flew to Kerema on May 16 and were picked up at the airport by Karo.Karo, threatened at gunpoint, then proceeded to give in to the demands of the accused and his accomplices or else they would “kill his children”.Police said that on Saturday, May 17, between 7am and 9am, Nanua and an accomplice got into a branch vehicle and went to meet loans officer Gabriel Ori inside the bank premises.A short briefing was held among them including Mr Karo.Mr Karo was instructed to go and get the safe combination numbers from his deputy’s house.The deputy, against her will, was taken to the bank and used the combination numbers to open the safe, with Nanua and his accomplices allegedly helping themselves to K825, 714 in cash.Nanua and his accomplices then escaped by boat to Sapeaharo Bridge where they got on a vehicle and came to Port Moresby to proceed on to rob Madang BSP on June 5, 2008, using similar tactics.
He was later recaptured by police along the Magi Highway enroute to Aroma in the Central province at about 2.30am last July 18 and allegedly shot in both feet’s.
In another infamous incident, one of the nation’s leading citizen and businessmen Sir George Constantinou was killed by just petty criminals outside the notorious Tete settlement at Gerehu on December 16 after inspecting his timber yard.
These opportunity criminals just made up their mind to rob and kill the 78-year-old knight only at that moment by just seeing a Whiteman coming their way in a vehicle.
They commit this incident using the old crime trend by using homemade gun and lethal hard objects.
Police have now detained and charged seven suspects.
The late knight came to PNG in 1954 and ventured into building and road construction and hotel industries.
These industries provided employment for thousands of locals to contribute to the national economy for almost 55 years. And it will still be doing so for years to come through the Constantinou group of companies.
In retaliation, police went in and demolished the settlement to fulfil what the Prime Minister Sir Michael Somare had warned about in November 2003.
Sir Michael had warned that one more killing would have this settlement removed.
Sir Michael issued this warning after 15 people were killed in the settlement .It was after the killing of his fellow knight that his warning was fulfilled.
Posted by Malum Nalu at 12/31/2008 08:11:00 AM