The year of Barrack Obama while in PNG, the Chief celebrates 40 years in politics 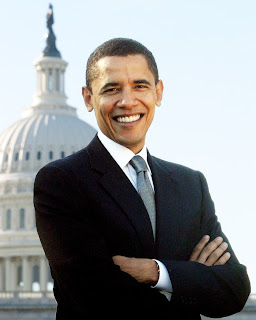 Brrack Obama on Capitol Hill...the first black man in history to be elected UP President 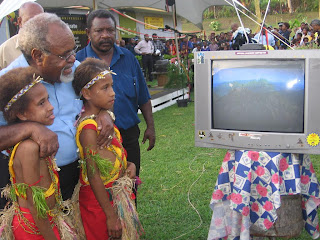 By DANIEL KORIMBAO
Editor In Chief
The National newspaper

A number of political events make the 2008 political calendar worth another peek before we turn our back on the year that has been, and look to the promises 2009 hold for each of us.
2008 had its ups and downs, and its share of forgettable and most memorable moments.
At home Prime Minister Sir Michael celebrated his 40 years in politics, an achievement unrivaled in the Commonwealth. The nation celebrated this milestone achievement by the chief, culminating in the launch of a local TV station Kundu, a gift from the Chief to his beloved people.
The year also saw Australian Labour Prime Minister Kevin Rudd visit PNG. Relationships between PNG and Australia had reached new lows with the Howard Government before Rudd took over at Kiribili house in a landslide election victory.
Embracing Somare in Parliament House during his visit in March, Rudd announced his new deal for the Pacific, and presented the Chief a Brisbane Broncos Rugby league jersey to mark the start of a new era in relationship. The Howard and Downer ways were gone.
The man at the centre of the soured relationship between the two countries, Julian Moti, is now answering sex charges in Australia.
The findings of a PNG Defence Force Board of Inquiry into how Moti escaped from Port Moresby to Honiara in a PNGDF plane on Oct 10, 2006, and who gave the orders at the political level has been released.
But it cannot be published or its recommendations implemented because of a judicial challenge by Sir Michael which is pending in the Supreme Court. Somare has reportedly been implicated in the Inquiry’s final report, but many believe those he trusted and appointed to senior positions within government betrayed him and did not tell the truth about the whole affair.
Another issue that will stick with the PM heading into the New Year will be his referral by the Ombudsman Commission for alleged misconduct in office, which is being challenged by his lawyers in the Supreme Court. The alleged misconduct relates to his annual returns dating back some 15 years. This case is expected to be resolved this year.
The grand old man of politics leaves public life in 2012, and the question being asked is who takes over. There have been a lot of speculations in the media, but as the year draws to a close the chief has not appointed a successor.
Within his National Alliance party, there are four deputy leaders who include Patrick Pruaitch, Don Polye, Puka Temu, and Paul Tiensten. One of them could take over, and whoever it is, the NA convention will decide when it meets to deal with this agenda.
There has been talk the Chief could hand over the baton to his son Arthur, the Public Enterprises Minister, but this scribe is reliably informed Mr Somare is not interested in the job at this stage of his political career.
Then there is Peter O’Neill, the leader of PNC, who has forged a close working relationship with Sir Michael even as Opposition leader in the last Parliament. He has a close relationship with a good number of NA members, including Pruaitch.
United Resources Party leader William Duma and party founder Anderson Agiru are also on the radar. It would be foolish to rule anyone out in PNG politics, so Bart Philemon and Sir Mekere Morauta, who are in the Opposition, must also come into contention.
The 18-months grace period protecting the Prime Minister from a vote of no confidence expires at the end of February next year. That’s the time even the most protected specie constantly look over his shoulder in case someone, even from within the camp, is lurking in the dark with that dagger.
With 85 MPs in Government, its unlikely Somare five-year term will be interrupted, unless his seemingly impregnable coalition implodes from within.
When he walks away into the sunset, he leaves behind huge shoes to be filled.
But let there be no doubt 2008 belongs to Barrack Obama.
Americans turned to Obama with a sweeping mandate at a time when the global financial crisis spurred by the sub prime mortgage crisis in the US is crippling economies around the world.
Who would ever forget that evening of Nov 4, when Obama stepped onto the podium in a stadium in Chicago to deliver a powerful speech, accepting the calling of the American people to serve them as their first ever black President?
Obama has a huge task on hand. The US and other major global economies are in recession, and his job is to turn that around. He has work to do to improve US relations with a lot of countries around the world, especially countries that resent Bush foreign policies, and his administration’s attitude to the two wars and global warming.
Papua New Guinea stands to gain a lot from the Obama Administration. We believe the government can capitalise on the Clinton influence in the White House to expand existing bilateral relationship, gain access to resources available in the US to fight the growing HIV/AIDS epidemic, and tackle global warming, an issue Prime Minister Sir Michael Somare has spoken keenly about on various regional and global forums.
As 2008 pass, let’s look to build on the promises we know are abound in this beautiful country PNG.
Posted by Malum Nalu at 12/31/2008 08:43:00 AM