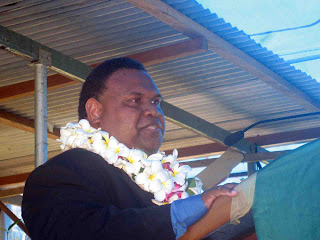 By VERONICA MANUK and LYTHIA SUITAWA

High Commissioner to Papua New Guinea Bernard Bata’anisia (pictured) has paid special tribute to the for its contribution to the human resources manpower of his country.

Speaking at the University of Vudal’s 12th graduation ceremony as guest speaker last Friday, Mr Bata’anisia said his government was indebted to the institution for educating and skilling many Solomon Islanders who now hold senior and responsible positions in the country’s government and private sectors.

The contribution by the University was made between the 1960s and 1980s through its campuses in East New Britain and Oro provinces when they were still known as and respectively.

Mr Bata’anisia said graduates from the then colleges continued to make an impact on the lives of the people and communities in because the training they received had equipped them to better serve their people, communities and country.

One such graduate is Sir George Lepping, the second Governor General of the , who graduated from Vudal in the late 1960s.

Mr Bata’anisia said visiting Vudal was a privilege because of the special relationship the institution had with his country.

“It is proper and fitting that I stand here before you here on behalf of the Government and people of Solomon Islands to say thank you to this institution which has done so much for my country,” he said.

“Thank you Vudal for contributing towards the manpower and human resources development of .”

The High Commissioner said education and training had strengthened bilateral relations between and over the last 40 years and thanked the Government and people of for forging this relationship, particularly through the education grant assistance to that had benefited many young Solomon Islanders.

Addressing the 125 graduands, Mr Bata’anisia challenged them to make good use of their qualifications in the environment they found themselves in after graduating.

“Your people, community and country will be watching you and demanding nothing less than total commitment and service in whatever field you are in,” he said.

The diplomat said like any country, had its own difficulties and challenges, and these could only solved by the country itself.

“Outsiders do not have all the answers to your challenges and problems but Papua New Guineans yourselves,” he said, when calling on them to take an active interest in the affairs and development of the country.

Mr Bata’anisia said he saw the role of the graduands as partners in nation building and urged them to contribute effectively to the country’s socio-economic development with the intention to make a difference for people and their communities.

“I urge you to remain faithful and strong to your beliefs and principals and to do what is right for the people and your communities,” he said.

The High Commissioner’s visit to the University’s ENB campus last Friday was his second one this year.

His first visit in July was to collect information on the University and begin dialogue on the re-entry of students to the institution.