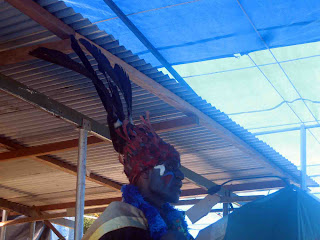 Graduates of the 12th graduation of the have been challenged to develop anticorruption behaviours and habits.

The call came from tropical agriculture degree graduate Nason Gene, who spoke as student respondent during the ceremony last Friday.

Mr Gene said corruption was hindering the progress of tangible development in the country causing people to suffer and urged his fellow graduates to practice anticorruption habits at all levels of their professions.

He said nationalists often spoke of transparency and accountability and formulated strategies against corruption but these often did not address the root cause of the problem.

“We need to look at what builds a person and build into the system of a person from inside out. We need a change from inside out and that is to build in us now, a habit of anticorruption and get addicted to it,” he said.

“If we get addicted to anticorruption from within us, only then shall transparency and accountability transpire and we can move our country forward,” Mr Gene said.

He told his fellow graduates that success would be within their reach if their characters were correct.

“The key to achieving it is not our personality, our temperament, our natural talents or even our present circumstances. The key is our character,” he said.

“If our attitudes and behaviours are correct, we can break through any barrier, overcome any obstacle, transcend any limitation and maximise any opportunity that comes our way.”

Speaking of the university they were graduating from, Mr Gene said it was one of the best higher education institutions in the country.

He added he was proud that the university was a well-disciplined institution.

“In fact, Vudal University is a better place to study without intimidation and discrimination of any sort towards our study, either from students (regionalism) or from surrounding communities,” he said.

He commended graduating students for their conduct during their time at the university and called on continuing and new students to maintain the same trend of discipline.

Mr Gene particularly mentioned the students’ approach towards the university administration when matters of concern arose.

“Students act professionally and where matters of concern arise, we practice professionalism in our approaches towards our administration, with understanding, and not take matters into our own hands,” he said.

Mr Gene said the graduands had witnessed many positive rehabilitative changes during their time at the University such as course reviews and diversification of academic programs that would benefit continuing and new students.

However, he urged the National Government through the university administration to better furnish learning facilities such as laboratories with equipment and materials that would improve student learning.

The student respondent also called for the involvement of students in research and publications, which he said would be an added bonus for students as well as build the reputation of the university.