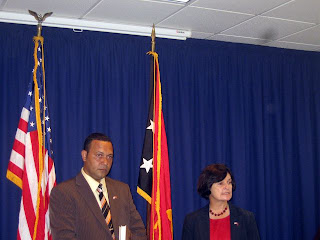 BULOLO MP Sam Basil (pictured above with US Ambassador to PNG Lesley Rowe) will be representing to witness the swearing-in of Barack Obama as the 44th president of the , The National reports. Mr Basil will join millions of Americans in celebrating the inauguration of Obama in on Jan 20.

He will be the only person representing PNG and the region to witness the change of guard in the .

The trip is fully funded by the government, which will enable politicians, journalists, academics and others to witness the transition of power in a civil society and how democracy works in the .

US Ambassador to PNG Leslie Rowe said Mr Basil would have the opportunity to talk to local officials involved in the elections.

“He will have the chance to meet with winners – politicians who won the elections – and losers – people who lost the election – in and as well as in ,” Ms Rowe said.

Mr Basil thanked the US Embassy for the opportunity to travel to the for the first time.

“My people of Bulolo are happy and excited that I will be taking this trip.

“They asked me to convey their thanks to the US Embassy, especially the ambassador, and they are delighted and happy for a politician to take the trip to broaden my mind and, also when I come back, I should have an in-depth knowledge of .

“It’s a very historical event where we will see the transition of an old administration to a new one,” Mr Basil said.

Ms Rowe said this would be a unique trip that Mr Basil would undertake with 21 other delegates from at least 20 countries.

“This is a very unique trip; he will be in the for about two weeks, initially travelling to and then to two other states, and ,” Ms Rowe said.

Mr Basil will be joined by 21 other delegates from countries in Latin America, Africa and South Asia, , and .