Making money from your flowers 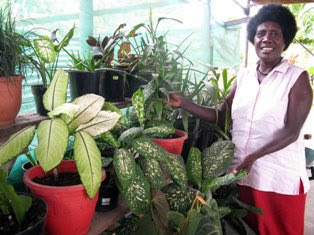 Floriculture, or flower farming, is an industry that has been dormant for years and needs to be revived.
This is according to Bertha Kamit, an extension officer with the division of primary industry in East New Britain, who says one can earn a lot from the floriculture industry if more effort is put into it.
Mrs Kamit graduated from Papua New Guinea’s oldest tertiary institution, Popondetta Agriculture Training Institute - now a campus of the University of Vudal - in 1980 and joined the division of primary industry at Kokopo as a nutrition officer.
She resigned in 1984 due to family commitments and returned to work in 1991 as an extension officer with Pomio district.
As an extension officer, she has been involved in many activities such as the eradication of cocoa pod borer, Newcastle disease, Women in Agriculture and many others.
Her commitment and hard work brought her to attend the launching of floriculture in Port Moresby in 2006.
“My interest began to build up so I started developing my backyard with flower planting and decorations in offices,” Mrs Kamit said.
Her backyard attracted and motivated a lot of people, especially women.
With the knowledge she gained, she ran workshops and training for women in the province.
Apart from beautifying homes and offices, Mrs Kamit says flowers are also given as gifts and used at important events such as weddings, birthdays, funerals, graduation ceremonies and shows.
Floriculture also provides a good income.
For instance, she charges K200 for backyard planting, while gifts and decorations for different occasions have their own fees.
She also has pot plants that can be hired for decorations of venues.
Mrs Kamit is grateful for the agricultural training she received that has enabled her to be successful in her hobby.
“I thank the college and the people who had trained me to become a successful woman,” she said.
Floriculture, according to Wikepedia, is a discipline of horticulture concerned with the cultivation of flowering and ornamental plants for gardens and for floristry, comprising the floral industry.
“The development plant breeding of new varieties is a major occupation of floriculturists,” it says.
“Floriculture crops include bedding plants, flowering plants, foliage plants or houseplants, cut cultivated greens, and cut flowers.
“As distinguished from nursery crops, floriculture crops are generally herbaceous. “Bedding and garden plants consist of young flowering plants (annuals and perennials) and vegetable plants.
“They are grown in cell packs (in flats or trays), in pots, or in hanging baskets, usually inside a controlled environment, and sold largely for gardens and landscaping. “Geraniums, impatiens, and petunias are the best-selling bedding plants. “Chrysanthemums are the major perennial garden plant in the United States.
“Flowering plants are largely sold in pots for indoor use.
“The major flowering plants are poinsettias, orchids, florist chrysanthemums, and finished florist azaleas.
“Foliage plants are also sold in pots and hanging baskets for indoor and patio use, including larger specimens for office, hotel, and restaurant interiors.
“Cut flowers are usually sold in bunches or as bouquets with cut foliage.
“The production of cut flowers is specifically known as the cut flower industry.
“Farming flowers and foliage employs special aspects of floriculture, such as spacing, training and pruning plants for optimal flower harvest; and post-harvest treatment such as chemical treatments, storage, preservation and packaging.
“In Australia and the United States some species are harvested from the wild for the cut flower market.”