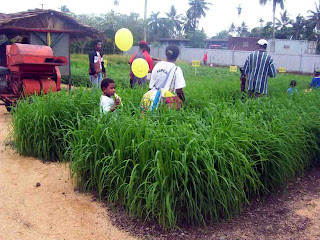 According to the Morobe division of agriculture and livestock production summary of 2008, Morobe produced more than 16,000 tonnes of paddy rice compared to 780 tonnes in 2003.

“People can grow not only grow rice for own consumption and supplement for other staple food but can be able to sell the surplus,” he said.

Mr Buieba said that most of the current small holder rice farmers were from , , Bulolo and Finschhafen.

He said farmers from Tewai-Siassi and Nawaeb were beginning to grow rice after discovering that it was convenient to grow and store.

Generally rice farming in the province is on a small scale, supporting household consumption

However, Mr Buieba believed that with accessible facilities and technologies, rice farming had a potential of becoming commercially-viable on a large scale.

He said most smallholder farmers had less than 1 hectare of rice field that was manually dug and prepared because they did not have access to tractors.