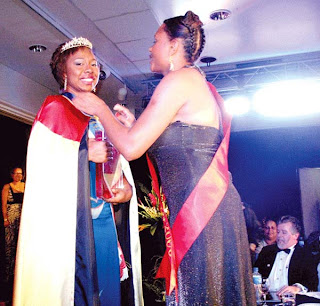 Caption: Antonia fulfils quest . . . Miss University of Papua New Guinea Antonia Singut (left) is ecstatic on being crowned the Red Cross Miss PNG 2009 by former Miss PNG Genevieve Roberts at the crowning ceremony at the Crowne Plaza Hotel on Saturday. The event was a huge success, according to the organisers.  – Nationalpic by AURI EVA

By CHRISSILLA KABE TALIS in The National

She entered the quest as Miss University of Papua New Guinea

(UPNG), and performed extremely well during the quest to be adorned with the crown on Saturday at the Crowne Plaza Hotel in downtown .

Ms Singut is of mixed East Sepik and parentage.

She is the eldest granddaughter of veteran journalist, the late Ian Boden, and she dedicated her win to him.

Ms Singut said her late grandfather, who passed away last November, had a great influence on her life and so she had decided to follow in his footsteps.

She is a third-year journalism student at UPNG and is also pursuing environmental science studies at the university.

The confident, charming, intelligent young lady has a way of lighting up the room when she enters, qualities that helped her win another major title – Miss Charity Runner-Up.

She also won other minor titles of Miss Friendship (voted by her fellow contestants), and Miss Photogenic

(chosen by the quest photographer).

As Miss PNG, Ms Singut said she would endeavour to commit and dedicate her whole life to the work of the Red Cross – disaster relief and humanitarian work.

Later this year, Ms Singut will go on to represent PNG in the Miss South Pacific Pageant in , and has promised to make the country proud when she participates in this pageant.

She made her sponsor very proud as the company’s undying support and dedication in assisting her in all her fundraising activities and preparations for the quest paid off in the end.

Not only is she the Charity Queen, Ms Wase also won another major

This 22-year-old of mixed Oro and Central parentage walked away with a Toyota Camry Vista last weekend, a prize from Ela Motors to the Charity Queen to acknowledge her efforts in raising funds for a worthy cause.

Altogether, the contestants raised about K90,000 for the Red Cross.

The other minor award of Miss

The crowning was a historic event for the quest, according to Sue Darby, a judge during the evening and a pioneer member of the quest committee who has always been involved in its activities over the years.

Ms Darby said this was so because apart from former Miss PNG Genevieve Roberts (2006-2008), and the 2009 Miss PNG Ms Singut, there were five other former queens who were present that evening.