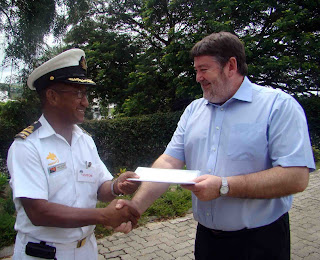 A senior officer from the PNGDF will leave for the this weekend to undertake a seven-week course funded by the British government.

Commander Tau Ila of the PNG Defence Force will attend the ‘Managing Defence in a Wider Security Context’ course at the in the from March 9 to April 24.

The high level international course is designed to expand a senior officer's knowledge and understanding of the skills required to run a modern, effective and efficient military in a globalised world – especially the military's relationship with a democratically-elected civilian executive and its promotion of transparency and good governance.

In wishing Commander Ila a safe trip to the the British High Commissioner to PNG, David Dunn, said:

“It is extremely important that senior military officers from around the world are able to come together to share best practice and compare working methods. Modern military forces need to be up to date with the latest thinking to ensure that they are able and equipped to deliver the quality of defence services expected of them and meet the new challenges ahead in what is a rapidly changing world.”

It also builds upon the very successful visit to PNG in October last year of senior international military officers from the RCDS in which they visited , Madang and Goroka.

The ’s Defence College of Management and Technology is one of three main colleges of the UK Defence Academy, the others being the RCDS and the Joint Services Command and .