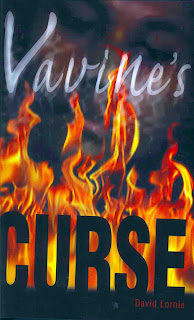 A powerful new book by Port Moresby-based journalist David Lornie shines the spotlight on the terrifying HIV/AIDS situation and associated social problems in .

Vavine's Curse is the inspiring story of a young orphan girl from a small inland Rigo village outside who, through no fault of her own, finds herself with a HIV sentence.

Ostracised by her fellow villagers at a very young age, Vavine has to battle her way through prejudice, male chauvinism, superstition and violence.

Her journey in life takes her from the village to the bright lights of and through a world of drugs, corruption, crime, poverty and prostitution in the big city.

David Lornie, no stranger to PNG, takes us through the urban jungle and shows how the people dress, talk, eat and drink.

We are introduced to teenage girls with mini skirts in sleazy nightclubs, corrupt politicians, and sugar daddies who prey on high school girls.

Vavine's pimp "uncle" Dennis, a typical sugar daddy, brings her to the city to work in his nightclub/cum brothel.

The innocent Vavine is introduced to the shady and seedy world of prostitution, alcohol, drugs and all things evil.

Dennis and his partner in crime, Billy – on the recommendation of 'boss lady' Emily - get the naïve village girl to be a courier for their lucrative drug-running business on the streets.

The "stink thing" within her, however, gets too much and she seeks the wise counsel of Father Michael, who runs the Holy Cross Centre in Tokarara, one of the poorer suburbs of .

The centre is cramped beneath a government-sponsored clinic and offer blood tests, counseling, treatment and, above all, love and understanding.

Fr Michael recommends that Vavine starts the anti-retroviral drug treatment programme, which can keep the disease under control for a long time.

The story takes a twist towards the end as Vavine is busted by police – who have been keeping her under surveillance all this time - and her Mike Tyson-like driver Butler, fast becoming one of her best friends, is shot dead in the process.

Devastated, lost and alone in a tiny, dank room, she has just about resigned on everything when Emily – who all this time is an undercover cop – comes in and sets her free.

And in a final happy twist, Gaba, a young village boy who has had a crush on Vavine all this time, marries her and they live happily ever after in the village…despite her HIV status.

Lornie has created this story of courage and determination in the hope that it will increase awareness of the horrifying threat of HIV/AIDS.

"This disturbing events that surround Vavine in her struggle for survival are common in PNG," comments Community Development Minister Dame Carol Kidu.

"This is a novel that deserves to be widely read, particularly by high school students, as the awareness it brings will serve as a sober warning about HIV/AIDS and the human costs."

Fr Jude Ronayne-Forde, of the Simon of Cyrene Centre, notes: "I grieve for the children of PNG: for the ones infected and affected by HIV and AIDS.

"They have a right to protection and care, and we adults are duty bound to give them a future."

He returned to PNG in 2001 to work for the Post-Courier where he is currently supplements editor.

He has a great love for PNG and is horrified by the HIV epidemic in this country which looks set to explode further and tear the country apart.

He wrote Vavine's Curse in the hope that it will help educate young people about the dangers of HIV and also to show that those with HIV are simply humans with a terrible disease who need love, not hatred.

Vavine's Curse – now on sale at Theodist and soon the UPNG Bookshop - is dedicated to the people of , with 10% of the author's royalties and 10% of the profits to be donated to Tessie Soi's Friends Foundation.

The Friend's Foundation provides support and care for people living with HIV/AIDS.

This support includes assisting parents in the prevention and reduction of the transmission of HIV to their babies; and Orphan Buddy system for children who have lost their parents, burials for unclaimed children from Port Moresby General Hospital and community-based home care.