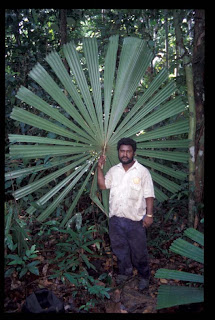 is one of the world’s greatest palm diversity hotspots with around 270 species, and the island is home to some of the most beautiful palms that thrive in the pristine and untouched rainforests.

Many of these palm species have great economic importance to rural communities in such as the coconut, betel nuts and other species which have great ornamental potential both within the country and internationally.

Although many palm species are known scientifically, most species remain poorly known, as there is a lack of indigenous plant taxonomists and botanists who are working on documenting this great palm diversity that the island has.

The Palms of New Guinea Project (PONG) involves scientists from six different countries (United Kingdom, United States of America, Denmark, Australia, Indonesia and PNG), who have come together to explore and document this diverse palm flora of New Guinea, resulting in a number of new species being discovered and described in the past five to six years - one of such a discovery is presented here.

In 1999, the late Joseph Wiakabu from PNG Forest Research Institute (PNGFRI) and John Worimbangu from the Momase Area Office of the National Forest Service in Lae, Morobe province,  collected for the first time, an aberrant species of a Licuala around Green River in the Amanab area of the Sandaun province.

The specimen was presented to us at the Lae Herbarium and the collectors mentioned to us that it had a very long inflorescence that reached the forest floor.

From the height of the palm indicated on the label we deduced that the inflorescence was at least 4m long – the longest ever recorded of the genus!!!

We checked with the measurements for the inflorescence length with experts in this group and discovered that this inflorescence length is much longer than the Licuala’s from , which is another centre of palm species diversity in the world – so we were so excited to go out and see for ourselves.

During one of our field campaigns organised within the framework of the PONG project we recollected the species along the banks of the near Vanimo again in the Sandaun province.

We described the species for the first time and named it Licuala longispadix Banka & Barfod sp.nov., which simply means the species Licuala with a very long inflorescence (spadix) and is named by Banka and Barfod and is in fact a new species (sp.nov. in Latin for “species nova” or “new species”).

The species is known from only two known localities in the Sandaun province where it is rare locally in lowland forest on alluvial plains dominated by species Intsia and Pometia.

This species of palm has a conservation status rating of “High Concern” as it has been recorded from only two localities in the Sandaun province, and from the type locality along the Pual River a careful search within a 100 m radius revealed only one individualand no regeneration, so the species has to be protected especially during any kind of forest clearance so that whatever population of the species in the area can be protected.