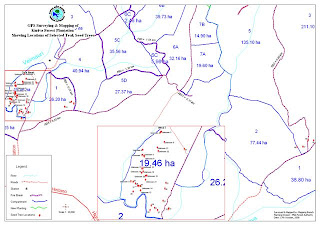 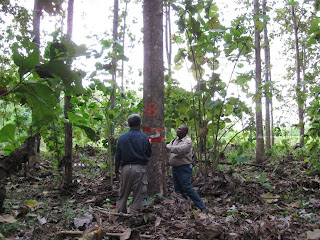 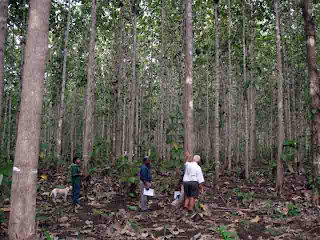 Captions: 1. Kuriva seed trees 2. PIP Project 2008 3. PIP Project 2008
TECTONA grandis or teak is one of the world’s premium timbers and fetches a very high price selling compared to other premium tree species such as kwila and taun.
The National Forest Service (NFS) has plans to establish additional major lowland teak plantations in the not-too-distant future.
Teak is not indigenous to Papua New Guinea but was introduced as early as the late 1800’s from South East Asia.
Teak from India is now known to be the best in the world, but to obtain seeds at present is difficult.
One of the scientific officers at PNG Forest Research Institute Gedisa Jeffery said during a site visit that  the NFS faced a serious threat domestically of vandalism, fire and illegal felling of candidate seed tree that could result in the gradual reduction of the genetic base of teak in PNG.
Mr Jeffery said that previous methods of marking candidate teak trees included the ring marking of trees with paints, steel tags and star pickets.
However, all these methods have failed over time,  due to natural or manmade conditions.
With the advancement in technology such as the  global positioning system (GPS),  it makes the job easier for scientist or technical officers to accurately pinpoint the exact location of selected teak trees in plantations, wood lots and trial sites making it easier to locate specific or marked trees.
A trial run on the GPS was put to test in the various teak sites in the Central province, East New Britain and Morobe to see if it wouldwork.
The testing opportunity to use GPS was under the International Tropical Timber Organisation (ITTO) project titled ‘Adding Value to Community Grassland’.
“With help from the Forest Management Division and the Mapping Branch at the NFS headquarters, a team comprising of M Howcroft, Francis Vilamur, Constin Bigol and Ripa Karo went about to test the idea of using GPS on locating trees in specific sites,” Mr Jeffery said.
“The test was to prove if a candidate tree can be located once the exact location was recorded into GPS data”.
He added that once the GPS position for a selected candidate teak was recorded they could return to that particular tree in future to re-measure and collect seeds or vegetative plant parts to access the status of the tree.
With the GPS used in tree location,  it will be helpful for technical and scientific officers to locate the exact tree location to collect coppicing materials if the trees were felled or burnt down for record and data purposes.