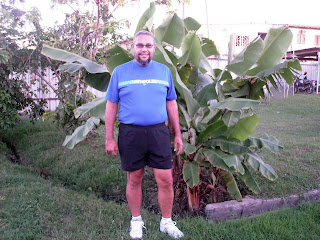 Less than two years ago, after the 2007 national elections, Angalimp- South Wahgi MP Jamie Maxtone-Graham was a disaster waiting to happen.
Tipping at scales at 165kg, the big man was obese, unfit, depressed, and was basically about to die.
But one day, 18 months ago, Mr Maxtone-Graham decided that enough was enough and turned his back on the lifestyle that was killing him.
He also turned to the Christian faith for answers.
Since then, the big man has lost a whopping 65kg, and looks leaner and meaner than he has ever been in his life.
When I met him last Sunday, the first time I had done so in two years, he was no longer the same fat old Jamie Maxtone-Graham who was living on borrowed time.
Running shoes, sports short and shirt made him look like an athelete, a lot younger than his 50-odd years.
Mr Maxtone-Graham wants Papua New Guineans to give up their bad habits like drinking, smoking, poor diet (including lamb flaps), and drugs as well as exercise more and find peace and solace in the teachings of the Bible.
This is timely as Sunday May 31 was World No Tobacco Day.
He practices what he preaches and sugar, soft drinks, and all processed foods are now definite ‘no-nos’ for him and his family.
Mr Maxtone-Graham already talks on radio about the importance of a healthy lifestyle and wants to write about it in a weekly newspaper column, as well as a blog on the Internet.
“Why did I get interested in my health?” he poses to me.
“Bascially, I had a serious health problem.
“I was a walking disaster.
“I was extremely obese at 165kg.
“I had gout, I had shortness of breath, high blood sugar, and I was extremely tired, fatigued.
“I was a sick animal as a result of my overindulgence in a life of living in the city, being an MP, and all the trappings that go with it like dinners, cocktails, parties.
“That was the life that I was living.
“It forced me to become more depressed and I was eating more and more.
“One day, two years ago, I had serious chest pains.
“I was suffering from angina (chest pain or discomfort that occurs when your heart muscle does not get enough blood).
“The doctor checked me and said my blood pressure was extremely high, my cholesterol was extremely high, my blood sugar was extremely high, my triglycerides (chemical form in which most fat exists in food as well as in the body) was extremely high, my uric acid (chemical created when the body breaks down substances called purines) was extremely high.
“My tests showed that 80% of the blood vessels to the heart were blocked.
“I was clogged up by the fat that I had eaten over many years and I was about to die of heart attack.
“The doctor looked at me and said, ‘you’re in a very critical condition.You need to take stock of your health and do something’.
“The doctor shocked me and I let go of everything.
“I started changing my diet and my lifestyle, and did more exercise.”
Mr Maxtone-Graham, an avid reader, went through several books, the Internet, and watched health programmes on YouTube to get a good picture of health and nutrition.
Cathy and Robert Badui, a couple who preach the message of good health in PNG, were a great inspiration.
Mr Maxtone-Graham found hope in American Dr Thomas Jackson of M.E.E.T Ministry, who teaches God’s plan based on eight health messages in the bible.
M.E.E.T. Ministry - http://www.meetministry.org/ - teaches the body was designed by the Creator to heal itself.
People need to be educated as to how to cooperate with nature, learning accessible, practical life-style principles: Godly Trust; Open Air; Daily Exercise; Proper Rest; Lots of Water; Always Temperate; and Nutrition.
Stress – distress - is killing people, according to the ministry, so it teaches people how to manage stress through the eyes of God.
“My life was in peril until then,” Mr Maxtone-Graham recalls.
“I accepted God as my creator and Jesus as my saviour.
“I now eat home-grown garden food.
“I don’t eat anything that’s manufactured or processed.
“I don’t eat any meat and I’m a total vegetarian.
“I’ve never been sick for the last 18 months.
“I’ve got more energy now.
“I do exercises in the gym, do cardio exercises, boxing, I run on the treadmill, I swim, and I play rugby touch.
“I’ve discovered that health is more valuable than all the gold and money in the world
He encourages fellow Papua New Guineans: “People neglect their health in pursuit of wealth, only to lose all their wealth to regain their health in the final days of their lives.
“Money doesn’t give happiness.
‘Money gives more and more problems.
“As the people reach 50 or 60, they are already falling apart
“Let’s not end up like this.
“Let’s not leave our health too late.
“I’m a believer in preventative measures rather than curative medicine.
“It’s a lot cheaper and wiser to do this.
“I want to share my experiences with other Papua New Guineans as I don’t want to see them dropping dead at an early age.
“I feel that someone has to champion the cause of a healthy lifestyle in this country.
“My message to the people of Papua New Guinea is that we don’t need Western food and Western lifestyles.
“We must go back to our traditional food.
“It’s the healthiest food in the world.”
Mr Maxtone-Graham can be contacted on email jamiemaxtonegraham@gmail.com.
Posted by Malum Nalu at 6/05/2009 12:17:00 PM