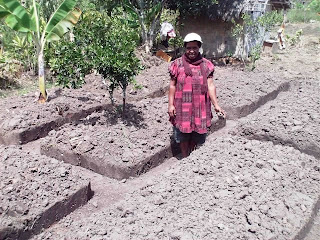 Woman farmer Angela Pinge (pictured)  is hard at work tilling the soil at her vegetable garden at Purigona base camp in Wahgi Valley, Jiwaka province, when I catch up with her.
Agriculture is set to boom and drive the economy of the newly-created Jiwaka province in 2012.
This will be at the expense of the rest of Western Highlands as Jiwaka – and in particular the great Wahgi valley – single-handedly produces the bulk of Papua New Guinea coffee, tea and fresh vegetables.
The three areas – which currently have the three electorates of Anglimp-South Wahgi, North Wahgi and Jimi – together have arguably the most fertile and productive agricultural land in PNG.
They have been bankrolling Western Highlands since colonial days, however, all that is set to change when Jiwaka officially becomes a new province in 2012.
Mrs Pinge is a district rural development officer employed by the division of primary industry in Western Highlands province.
She is also engaged as an extension advisor by the Fresh Produce Development Agency to advise women farmers in the Anglimp-South Wahgi area.
She practices what she preaches and grows a variety of vegetables in the rich and fertile soils of the Wahgi Valley.
“Demand for fresh vegetables is high and the supply is low,” Mrs Pinge says.
“I want to help make up for this shortfall by growing English cabbage, capsicum, potatoes, kaukau, tomatoes, broccoli and other vegetables.”
Mrs Pinge is passionate about her work.
“We have four village extension officers,” she says.
“I am the supervisor.
“This is under the FPDA network and it’s working quite successfully.
“I supervise them, and they provide training on all aspects of vegetable production.
“They’re basically volunteers in their own community.
“They must have nurseries backing the gardens, a compost house and a training centre.
“This is how we work with them.
“We are also involved in helping farmers look for markets and helping them to source funding for their projects.”