Apap wows them to Jiwaka land 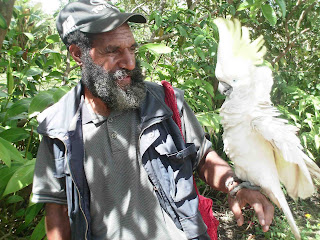 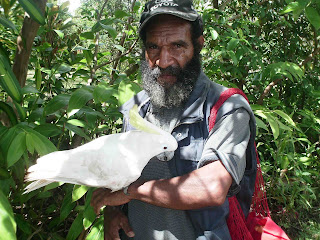 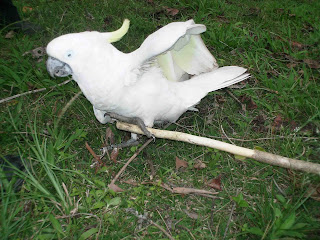 In Robert Louis Stevenson's story Treasure Island, the one-legged pirate Long John Silver had a parrot which cried "Pieces of eight".
The parrot's name was Captain Flint.
Like Captain Flint, a 21-year-old white cockatoo named Apap (uncle) is a big hit with visitors to his home at Purigona base camp in the Wahgi Valley of the new Jiwaka province.
Apap happily walks around saying “hello” to everyone and flapping his wings as his sign of shaking hands.
According to Apap’s ‘parents’, agriculture officers Palme and Angela Pinge, the bird was part of a bride price payment in Nov 1988 and was given to them.
Apap has since become like a child to them and lives, eats and talks with the family at their picturesque countryside home in the great Wahgi Valley.
“He was part of a bride price payment from Gumine in the Simbu province,” Mr Pinge told me.
“He was given to us in Nov 1988.
“He’s been with us for 21 years now.”
During a meeting of coffee extension officers at his place, Apap happily walked around saying “hello”, flapping his wings and being the true host.
According to Wikipedia, the white cockatoo can live up to, and perhaps beyond, 80 years in age, meaning life has just begun for Apap at a time when the new Jiwaka province is about to be formed.
Posted by Malum Nalu at 7/28/2009 12:00:00 AM