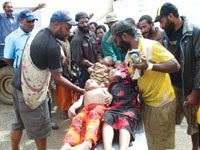 Caption: Sad and emotional moment ... The bodies of the four children are being brought to the Mt Hagen General Hospital as their relatives grieve in the background. – Picture courtesy of Dr Malts WaiKids

By JAMES APA GUMUNO in The National, Papua New Guinea's leading daily newspaper
A MOTHER is in police custody in Mt Hagen, Western Highlands, after she allegedly killed her four children and dumped them in a river.
The bodies of the four children were recovered at the Kum River.
It is believed the woman murdered her children in the early hours of Saturday morning.
The mother surrendered to police, after being satisfied that she had killed or drowned all her children.
Police said the eldest daughter was eight, second daughter aged seven, third, a son, aged five, and the youngest a boy about two and half years old.
Metropolitan Commander Chief Insp Peter Roari said yesterday the mother was in police custody and had not been charged yet.
Chief Insp Roari said the bodies of her children were recovered by her tribesmen on Saturday.
He said the woman, believed to be 35, told police during a brief interview that she drowned all her children because her husband never looked after her and the children.
She told police she was fed up with the husband’s constant drug abuse.
Chief Insp Roari said the woman was from Togoba village but married to a Moge man, and they lived at Kuiya village outside Mt Hagen city.
He said this was a very rare case and had shocked residents of Mt Hagen and Western Highlands province.
Chief Insp Roari said he believed this was a first of its kind in the province and country, where a mother decided to take the lives of her four innocent children.
He said homicide detectives would now question the mother and find out what forced her to kill her children.
She will undergo medical examinations.
The bodies of the four children are in the morgue at Mt Hagen General Hospital.
When hearing of the gruesome killing, a shocked North Waghi MP Benjamin Mul said the mother should be put to death.
He said that she was not fit to live in this world.
He said he could not believe that a mother could do such a thing to her children.
“Even animals love and care for their babies,” Mr Mul added.
“She is worse than an animal and should not live in our society as she poses a great risk to our children.”
Provincial police commander Chief Supt Kaiglo Ambane said that there was a possibility other people might have been involved.
He added police were investigating.Chief Supt Ambane supported Mr Mul’s call for the death penalty to be imposed immediately to deter such killings. Friends and relatives are in mourning at Kuiya village.