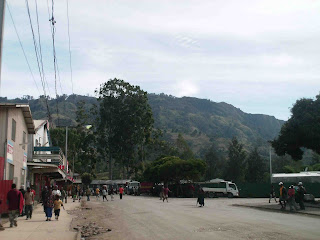 A street of Kundiawa in the morning. It later in the day becomes filled with all manner of people including hombrew and drug users 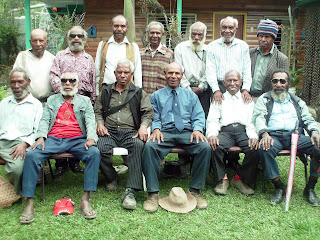 ‘Enough is enough!’...Fed-up Kundiawa-Gembogl leaders who have declared all out war on alcohol, drugs and gambling

Village elders in the Kundiawa-Gembogl area of Simbu province have declared war on alcohol, drugs and gambling.
This follows hot on the heels of Kundiawa-Gembogl’s zero-tolerance of these scourges of society in Simbu, the Highlands and all of Papua New Guinea.
Kundiawa-Gembogl is fast becoming a model for the rest of PNG with one of the best community policing systems in the country which has seen a drastic drop in law and order problems in the Simbu capital.
The village elders made their individual declarations at a meeting with Coffee Industry Corporation officers in Kundiawa last Friday to introduce them to introduce them to CIC’s revolutionary new District by District Coffee Rehabilitation Programme.
CIC officer Brian Kuglame, who led discussions at the meeting, stressed that PNG had to do way with negative impediments such as alcohol (particularly homebrew), marijuana and gambling (particularly card) if it was to move forward.
The great Highlands coffee industry has suffered tremendously because of alcohol, drugs and gambling, as it is those addicted to these who steal cherries and sell to feed their habits.
Quality time which could be productively spent in the coffee garden is instead wasted on drinking, smoking drugs and playing cards.
Sale of coffee cherries has since been outlawed in PNG with a hefty fine of K1, 000 or 18 months jail for those who break the law.
“We have to go back and work the land,” Mr Kuglame asserted.
Mandumi village councilor John Nuai told of the difficulties he faced in encouraging young people in his ward to stop drinking homebrew, using marijuana and gambling.
“I try my best to discourage them from these bad habits but it is very hard to convince our young people,” he said.
“One of those in my area who is involved in production of steam (homebrew) is the deputy headmaster of a nearby school, and I find it very hard to talk with him.
“Dances are also a major cause of social problems and contribute to the spread of HIV/AIDS.”
Mount Wilhelm village elder Philip Kondaygl, 71, said after the meeting that Simbu had suffered greatly because of alcohol, drugs and gambling.
“Playing cards is now a major problem in Simbu and is a waste of time,” he said.
“This time could be better spent in the coffee garden.
“Home brew and marijuana must also be stopped.
“We must teach our young people to go back to the land and there will be change.”
The elders agreed to walk throughout Kundiawa-Gembogl to discourage young people from bad habits and encourage them into productive activities such as CIC’s new coffee rehabilitation programme.
Posted by Malum Nalu at 7/27/2009 08:37:00 PM