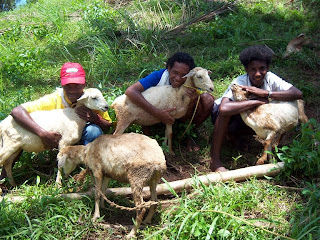 Ecom High School students have fun taking care of sheep and goat recently donated by National Department of Agriculture and Livestock. The livestock will be one of Ecom’s main attractions during World Food Day celebrations 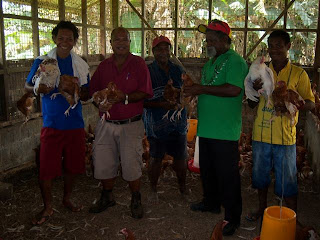 Friday week, Oct 16, is World Food Day.
And in Papua New Guinea, preparations are underway in most provinces for government agencies, provincial administrations, non-government organisations, agricultural companies, farmer groups, farmers and the public to celebrate the international event with a wide range of activities.
The 2009 World Food Day theme is ‘Achieving Food Security in Times of Crisis’.
It is important that every man, woman, boy and girl must have access to sufficient, safe and nutritious food to meet their dietary needs to live an active and healthy life in times of crisis.
Everyone needs to be reminded that at a time when the global economic crisis is dominating everyday lives, we must think about the small-scale farms and rural communities where the majority of the world’s hungry live and work.
PNG, therefore, has a commitment to increase public awareness and understanding of the problems of hunger and poverty.
It is important that all stakeholders work together to make sure hunger is recognised as a critical problem, and solve it.
The 2009 official WFD will be celebrated in the Manus Province over three days, starting next Thursday, Oct 15, which is World Hunger Day.
A number of high-profile figures have been invited to attend and observe the celebrations in the island province.
The programme commences on Thursday with two field visits, one to Kawaliap primary school in the Tetidu LLG area in inland Manus, and the other field trip is to Ahus Island and Liap primary school on the south coast of the province.
The objective is to give the visitors an insight into the food security programme being initiated in the primary schools and the impact of global warming and its effects on food security.
Ahus Island was recently struck by king tides, which devastated some parts of the island and the community is now considering relocating to the mainland.
In the evening, there will be a seminar at the Ecom High School mess where key papers on food security and other issues relating to the WFD theme will be presented by selected speakers.
It is expected that representatives from the Department of Agriculture and Livestock, Department of Education, National Agriculture Research Institute, Manus provincial administration and Ecom High School will present papers.
National Broadcasting Commision’s Radio Manus will provide live broadcast of the seminar.
On Friday, Oct 16, the programme will commence in Lorengau town with the display of floats from a number of schools and the provincial administration.
The floats will move around the town and head to Ecom High School, which will be the venue for the celebrations.
Other activities including official welcome speeches and keynote addresses will be presented, followed by the launching of the Ecom High School self-sufficiency project, smallholder rice extension model and NARI/Ecom high school agriculture research co-operation.
Meanwhile, stalls and other displays will be set up by individual farmers, schools, government agencies and other groups to commemorate the WFD.
It is expected that the displays will comprise of local subsistence food crops, cash crops, marine products, livestock, cooking demonstrations, agricultural information publications, agricultural services and others.
A Miss World Food Day Manus segment has been included which should draw a big crowd.
The Ecom High School agriculture self-help project will be showcased during the WFD celebrations.
This concept has been widely supported and many believe should be adopted by other schools throughout the country.
The school students will be proudly displaying a number of agricultural projects that they have initiated including piggery, poultry, sheep and goat farming, sweet potato and taro production and others.
Manus provincial administration through its agriculture division will be highlighting agricultural activities in the province including coconut rehabilitation and coconut biofuel project, cocoa, rubber, vanilla, marketing services, food crops production and others, which have been made possible with funding support under the National Agriculture Development Plan.
On Saturday, Oct 17, which is World Poverty Day, there will be a presentation by the Miss WFD Manus contestants.
This will be followed by debate and quiz on food security issues to be contested by school students.
Following the events, the WFD committee will award prizes to the various winners of all categories, including Miss WFD Manus.
Posted by Malum Nalu at 10/08/2009 01:52:00 PM