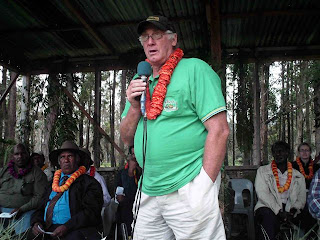 Agriculture businessman and strong potato advocate Grame Ross (pictured), of Alele Farm Fresh Produce, says potato has the best returns in agriculture with an 86% profit margin,  the industry is worth over K100 million and is a guaranteed source of food security.
He was speaking during the recent opening of Fresh Produce Development Agency’s potato screen houses in Tambul, Western Highlands province.
“The potato, according to experts, is the crop with the best return in Papua New Guinea.,” he said.
“We have a big need for quality seeds in PNG.
“Many people in PNG are crying for quality seeds.
“These new screen houses are a big step forward.
“Before 2003, we were importing a lot of seeds from Australia.
“Today, we are independent in seed production.
“Papua New Guinea can do it.
“We don’t have good distribution.
“You Tambul have good supply.
“There must be equal distribution in Papua New Guinea.
“The seed industry is a new one which can be worth up to K46m annually.
“There is an urgent need for training, especially in such areas as safety when using chemicals.
“Potato is a big deal.
“It is disease-free and nutritional.
“This will create family values in PNG.”
Eastern Highlands agricultural advisor John Sari said potato was the best bet for farmers in high-altitude areas of PNG.
“Tambul has the ideal climate or growing potatoes, being situated 2,000m above sea level, where coffee doesn’t grow well,” he said.
“There is now light at the end of the tunnel.
“Potato will one day beat coffee and cocoa.”