The magic of Kavieng 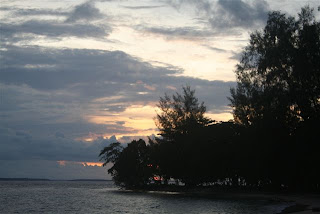 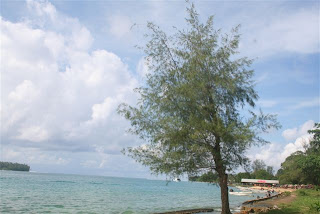 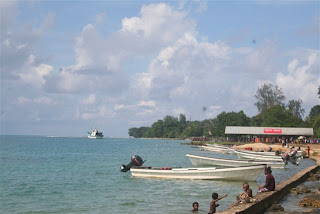 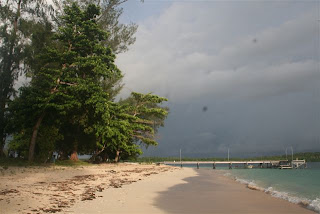 The feature of the place, and the entire for that matter, are the scenic and unspoiled beaches.

Last Friday, we visited beautiful , where an innovative and exciting development is taking.

The National Fisheries Authority is building a new research facility on Nago together with housing for its staff and researchers, as well as other associated facilities, at an estimated cost of K5-K6 million.

Nusa Island Retreat, with the green lights of the NFA, is building a tourism facility, given that Nago has some of the best surfing, fishing and unspoilt white, sandy beaches in Papua New Guinea.

Kavieng is situated at the northern tip of .

It has often been described as the typical “ island port”.

It has a large, beautiful harbour and is a popular destination for sports fishing enthusiasts and cruising yachts.

Along the edge of the harbour is Nusa Parade, a gently curving road, shaded by huge trees, which passes many points of historical interest, the main market, the port, fisheries and the hospital.

Nusa Island Retreat, only a short two-minute boat ride across the harbour, has an excellent bar and restaurant set right on the beach complete with sand floor and tables made from coconut trees.

More and more tourists are visiting this part of paradise and you can also find out why with a visit there.

I especially loved the scenic and unspoiled beachfront, market and the long and winding .

Kavieng market is one place where you can find the tastiest sea food and freshest vegetables.

It is situated on the foreshore and is a central hub of activity most days of the week, except Sundays.

There is a fantastic variety of locally grown fruits and vegetables, fresh and smoked fish, live mud crabs, baskets of sunga and kina shells, and of course plenty of buai.

Although generally a produce market, you will also find woven baskets, locally printed laplaps, and handmade bilums available for sale.

In addition to the market, there are a variety of kai bars in Kavieng where you can pick up a cheap local-style feed.

The highway is named after German administrator, Franz Boluminski, who landed at Kavieng on June 30, 1900, with his wife Frida.

He supervised the task of building a road, and in less than four years, 100km was built using karanas (dead coral) that is in plentiful supply.

Boluminiski gained widespread respect for establishing peace on ; however, it is for the highway that his name lives on.

His tough but fair dealings with natives and whites alike in were frequently referred to by visiting Germans as “the South Sea Pearl of German colonial possessions”.

Boluminski had built a fine residence on a ridge with a grand staircase descending to the harbour with extensive gardens.

A post office was established in 1904 and overseas vessels were visiting Kavieng by 1912.

At the time of Boluminski’s death, a fine road capable of being used by the new motor vehicles just arriving stretched 165km from Kavieng carrying produce to port and facilitating the administration by strategically-located government rest houses.

It was the longest and best road in the Pacific until the 1950’s.

Of course, you can’t say anything about Kavieng and New Ireland province without mentioning the Chinese, who were brought to Kokopo and then Kavieng in the late 1800’s, inter-married with the local women, and their legacy lives on to this day.

Kavieng is a sleepy little town with a golf course, a range of restaurants, bars and facilities, including banks, supply stores, bakeries and supermarkets.

Visitors should not expect to come to Kavieng to experience an abundance of cafes or restaurants, shopping strips and nightclubs, as they will be very disappointed.

The Kavieng Hotel has a bar, complete with pool table and satellite TV, and a garden setting restaurant which is open every day of the week for breakfast, lunch and dinner.

The Kavieng Hotel, however, is famous for its Friday Night Seafood Buffet with what seems like an unlimited amount of mud crabs and crayfish, as well as plenty of fish and other seafood, salads and vegetable dishes.

The Kavieng Club has a large bar and a billiard room, and is a relaxing place for a drink after a game of golf on their nine-hole golf course or a quick snack for lunch or dinner.

The Malagan Beach Resort is perfectly situated on the beachfront, and its outside pool decking area is an excellent place to watch the sun set whilst enjoying a drink from their bar.

Its restaurant is open for breakfast, lunch and dinner and extends outside to a shaded patio area on the beach.

Sunday night is BBQ Night at the Malagan.

Nusa Island Retreat, only a short two-minute boat ride across the harbour, has an excellent bar and restaurant set right on the beach complete with sand floor and tables made from coconut trees.

The bar has a great selection of local and imported spirits, an excellent wine list, and an extensive cocktail list.

Nusa’s restaurant is open for breakfast and lunch with a good selection to choose from off their menu, with buffet dinners available every night of the week, specialising in the area’s fresh seafood and vegetables.