The strength of a woman 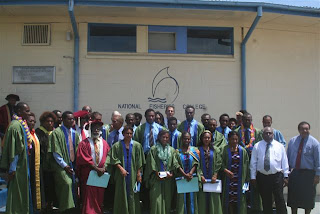 ROBED professionally in her black academic gown the woman sat quietly watching as the students walked up to the podium one by one.

Tears filled her eyes and rolled slowly down her cheeks as each one was congratulated by University Chancellor Sir Rabbie Namaliu before he handed them their scrolls.

As they walked down the stairs with the scrolls firmly wrapped in their hands, the pride on each of their faces was evident.

They had done it!

Completed their course in flying colours!

The same pride that they felt shone in the woman's eyes.

It was her day as much as theirs.

This was the final chapter of a journey they had started together through uncharted waters – she and them.

The scene before her evoked mixed emotions - intense maternal pride and a sense of sadness because she knew her protégés would now be leaving her.

After muolding and guiding the 16 diploma and five degree Fisheries and Marine Resources (FMR) graduates of the University of Natural Resource & Environment (UNRE) for several years, the graduation ceremony was a milestone achievement for Marilyn Apa.

Despite many challenges, she had worked tirelessly with a firm and committed determination to see them and the program succeed.

Ms Apa is the pioneer coordinator of the FMR program which was introduced in 2006.

She loves the ocean and its abundant and diverse marine life, but this love is a passion she developed with the FMR programme.

Not surprising when you realise she comes from Western Highlands, a province situated several hundred kilometers away from the sea.

An agriculturalist by profession, the challenge of switching to a new field let alone head a completely new programme for the University was daunting for Ms Apa.

She had to dig deep within herself to find the courage to move away from the familiar surroundings of UNRE's main campus in East New Britain to Kavieng in , a town she had never even given much thought to before then.

While the challenges and difficulties faced with coordinating a new programme were many, her quiet determination and commitment has contributed to the success of the programme.

According to Ms Apa, the concept in natural resources is the same and can be applied in agriculture, fisheries or forestry.

She said in the FMR programme students learn everything about fisheries and marine resources from commercial fishing operations to post-harvest.

"They can fish, handle the fish, navigate boats and sustainably manage fisheries.

"They know the science of fisheries, statistics and monitoring, fisheries business and marketing as well as computing and how to write up project proposals," she continued.

"These students are the best prepared graduates professionally, because their current employers have expressed satisfaction with their job performances."

With the FMR programme completing its first full cycle, as much as she loves the sea, Ms Apa feels that it is now time she returns to the blue ranges of the Bainings.

She believes the two fisheries lecturers that were recruited to assist her, Aisi Anas and Rachel James, are capable of carrying on if she leaves.

Ms Apa is grateful, however, that she had the privilege of being part of the history of the FMR program but more importantly of having the chance to interact with the young minds that have enriched her life as much as she theirs.