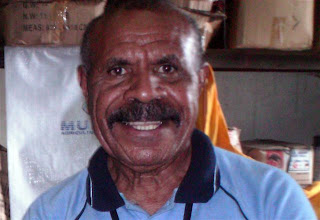 Coffee veteran Ricky Mitio today (Sunday, December 20, 2009) announced his retirement from an industry he has been in for the last 33 years, as news broke that he has been replaced as chief executive officer of the Coffee Industry Corporation.

Mr Mitio (pictured)  was on recreational leave when informed that he had been replaced in the CIC hotseat by Navu Anis, a former CIC senior staffer, by the National Executive Council last Wednesday.

Mr Mitio, Mr Anis and former CIC chief scientist Potaisa Hombunaka had been in the running for the position after Mr Mitio’s contract expired.

Mr Mitio, who was disappointed at the appointment, offered the CIC board his successor plan to ensure competent executives took over the running of the multi-million kina which involves more than two million rural people.

He said that the NEC may have been misled in the appointment process with Agriculture Minister John Hickey, who was not present at the meeting, shocked his submission was hijacked in Cabinet.

“A judicial review is underway to determine whether or not the acting Minister for Agriculture and Livestock Andrew Kumbakor, who is Minister for Housing, has indeed overstepped other Ministers’ portfolios in sponsoring the NEC submission without consent,” Mr Mitio said.

“It’s up to the CIC and the Government to sort out these confusions.

“I have already informed the CIC board of my retirement and I shall be moving on.

“I am also very disappointed about the weaknesses and conflict the regulatory statutory authorities (RSA) act has brought about in the statutory organisations and other state-owned entities (SOE) chief executives appointment process.

“We had faith in the merit-based appointment being adopted under the RSA act.

“However, when the statutory organisation’s preferred choice is overridden by political interests in the NEEC, it questions the integrity of the merit-based appointment process.

“In the case of coffee, the preferred candidate of the CIC board, the recommendations from the Public Service Commission, and the subsequent recommendations of the Minister responsible were all ignored by the NEC.

“In fact, the CIC board is forced to employ someone it did not approve of and is now forced upon it by outside political interests.

“It is not based on technical competence required by the merit-based appointment procedures of the RSA act.

“It is a total abuse and sabotage of due processes.”

Mr Mitio said quality of leadership for the administrator of the coffee industry called for far-reaching personal attributes that academic qualifications alone could not buy.

“Leadership qualities also cannot be bought and sold from the job,” he said.

“These prerequisites are inherited through deep commitment to profession and are acquired on the job.”

Mr Mitio said under his successor plan, four candidates had been identified to be groomed to take over the CEO position, coming from both within and outside the CIC.

“There will be a short period of 12 months to screen and groom the four potential candidates, after which the board will appoint two suitable candidates to understudy the CEO position, so that the board should be in the position to provide a list of nominees that meets its performance-driven criteria to the Government for its final appointment,” he said.