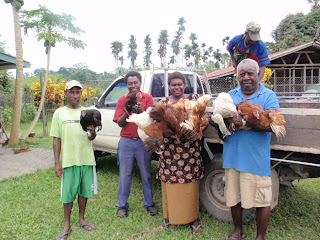 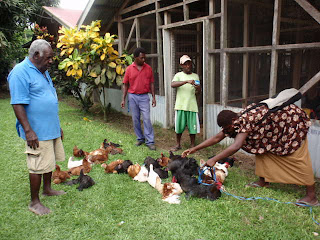 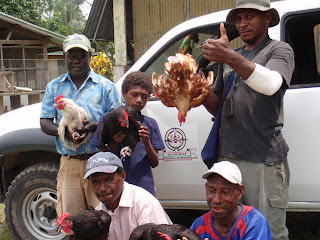 Captions 1 and 2: Australorp chicken distributed to a family in Kabakaul, 3:     DPI workers from purchasing Australorp Chickens for their district

National Agriculture Research Institute’s poultry unit at its Islands regional centre in Keravat is aligning itself and slowly gaining momentum in supplying poultry stock to farmers in and the region.

This is being done subsequent to experiences of disease outbreak in the province in late 2006.

Following the detection of the deadly poultry disease, a blanket ban was imposed on all movement of livestock and livestock products into and out of the province.

The ban hindered NARI’s poultry development initiatives but the small hatchery and breeder unit stood tall to deliver beyond imagination.

National Agricultural Quarantine and Inspection Authority (NAQIA), from its tests, declared the Keravat poultry facility to be clean and reliable to supply the sentinel flocks to those areas whose village flocks were destroyed by .

During the restocking exercise, NARI Keravat hatched and distributed between 12 000 to 14 000 young chicks to the affected areas within the province.

The start of the restocking exercise, which commenced in early 2007, was completed in July 2009.

Presently, the ban is only applicable to livestock species going out of the province.

But those individuals and farmer groups within ENBP, who want to obtain stock from NARI Keravat, can place your orders now.

Australorp and other crossbred birds developed at Keravat are dual-purpose birds, good for meat and egg production.

Their feeding regime is not restricted to expensive commercial rations.

The breed is suitable for keeping under intensive and semi – intensive management levels.

There are already significant purchases from local level government (LLG) areas like Bitapaka, and Sinivit, which are getting young chicks to distribute to their contact farmers.

Commitment was shown by Livuan and Duke of Yoke LLGs to get some chickens for distribution in their wards.

The Keravat poultry unit was established in 2004 with funding support from AusAID under the Agricultural Innovations Grant Facility scheme.

The facility’s purpose was to establish a poultry breeding and hatchery unit at Keravat for the production and supplying of Australop chickens to small holder farmers to the so as to improve food security, nutrition and income generation opportunities.