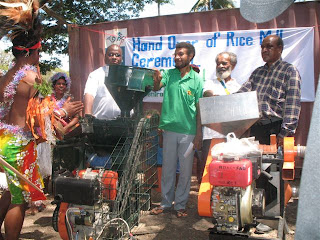 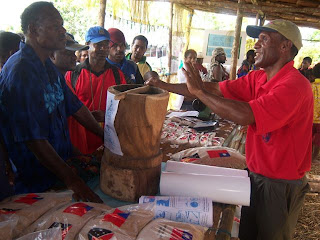 Rice farmers in the area of are looking forward to improved rice production this year.

The farmers were given rice seeds in 2003 by the Department of Agriculture and Livestock to plant but their main problem has been the lack of milling equipment apart from high transport costs.

Getting their act together, the farmers formed the Manari Rice Farmers Association, and have sought further assistance from the Central provincial administration and DAL.

President Alex Wageri said about 28 farmers established the association and their main objective was to acquire a rice mill from the appropriate authorities.

He said Manari villagers had the potential to grow more rice but they needed milling machines and other technical support.

“We have been trying hard to get the rice milling machines since 2004,” Mr Wageri said.

DAL, Central provincial administration and the farmers association also signed an agreement for the use, management and maintenance of the mills.

Mr Wageri said: “We are very privileged to have the mills and today marks one of the successes for our people.”

He said the mills would boost rice production amongst six villages and lead to food self-sufficiency.

He said farmers were eagerly looking forward to growing rice in bigger plots in 2010.

Officials from the provincial administration and DAL urged the farmers to take good care of the milling machines.

They said rice cultivation would also boost food self-sufficiency within their households and community.