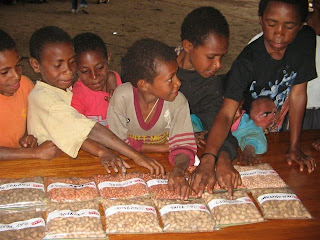 Caption:  Potential peanut farmers from the Highlands checking seeds of some of the high-yielding peanut varieties suitable for cultivation in the Highlands.- Picture courtesy of NARI

By SENIORL ANZU of NARI

These improved peanut varieties have been recommended and released to the PNG farming community.

They can complement the cereal and tuber food staples as root and tuber crops lack the essential proteins necessary for balanced diet.

Peanuts also improve soil fertility for other crops and can be a major source of cash income, particularly for women.

However, current peanut production levels in PNG are generally low with pod yields of 0.5-1 tonnes per ha when the crop’s potential stands at 3.4 tonne per ha with appropriate improved production technologies.

With a domestic market valued at K29 million and serious engagement of farmers in peanut production, it is imperative that PNG farmers should have access to appropriate improved production technology for enhanced yields and economic gains.

Peanuts are one of the most-profitable crops in PNG, producing around 30, 000 tones each year and providing a major portion of family income in the PNG Highlands.

Meanwhile, a new peanut production manual is also available for peanut producers, processors and educators to further enhance the crop as a leading industry in PNG.

The 77-page document provides scientific information about crop agronomy, as well as being a practical, field reference tool for smallholders, peri-urban gardeners, researchers, students and remote villagers who grow peanuts.