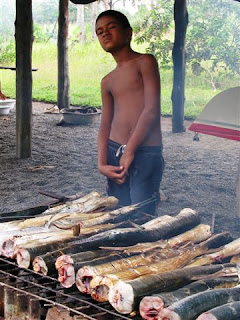 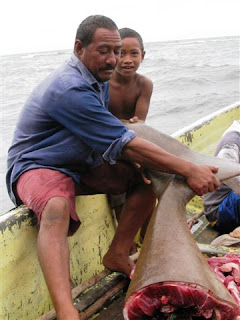 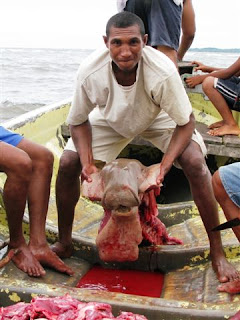 Tail of a dugong

Vevao Kula of Kelekins, a beach hamlet between Viriolo and Lalaura villages, butchering a dugong caught in a passage on a reef near the Abau lighthouse 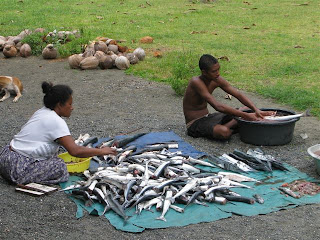 Fishing nets, floaters, snorkeling flippers and mask hung out to dry, dinghies and canoes afloat under huge houses with large kitchens and verandas built on tall, crooked mangrove stilts over the sea, and the laughter of swimming children is a typical sight in the fishing village of Viriolo.

Virolo is located at Cape Rodney, a five-hour drive down the Magi Highway, southeast of Port Moresby. It is the second last village on the Aroma coast but the last of the Hula dialect speakers. The inhabitants are descendants of migrants of who originally came from Alukini in the Hood Lagoon.

Having a long tradition of being nomadic seaman, they struck an ancient pact several generations back to settle in amongst the Aroma people of Kapari to solidify a bartering system where seafood could be easily exchanged for garden produce, a relationship that still exist to this day.

The village is a cluster of houses built on mangrove stilts located at the mouth of an estuary,with a tidal plain that is completely flooded in several metres deep of seawater during high tide and exposes several kilometres of sand and shallow waters when the tide recedes, serving as a playfield for cricket and rugby. Sports activities are scheduled around the times when the tide has receded.

The people are peaceful, harmonious and definitely happy, practicing an evolving culture steeply entwined and shaped by the United Church which has roots back to the London Missionary Society. This has set the foundations for a solid social fabric that promotes discipline, respect and social order that has been able to well withstand the onslaught of external influences and change

All daily social activities revolve around song, dance and church. Whether it is melodious voices and sounds of Ukeles and Guitars in the typical Aroma Coast tunes that fill the early evenings as young people gather to socialise or the sounds of the peroveta (prophet songs) as elders meet for daily prayers in the early mornings and evenings.

Given that the people’s whole livelihood depends on the sea, they are seasoned seafarers whose quest to fish the oceans sees no boundaries. A regular fishing trip will easily last two days involving two to three dinghies with six to10 divers venturing onto offshore reefs as far as the waters off Milne Bay and deep into the Coral Sea in search of all that is edible and sellable that the sea can offer.

The village rises early at 4 or 5 am when wives, sisters, mothers warm the fires and prepare tea and food for the returning fishermen. Reef fish, turtles, dugongs are regularly brought back and smoked and prepared for sale in the local markets or in town. A simple ritual is always observed where only fishermen will unload and distribute the catch for consumption and sale.

Wives and sisters are dispatched to take the catch by PMV into Port Moresby to sell and bring back food supplies of rice, flour, sugar, tea, salt, tobacco and fuel.

The people are oblivious to occurrences of the in the outside world, with their only care being their daily existence and happiness. Sharing of all catches ensures that all members of the village community are cared for.

Their ancient values retained from a nomadic tradition is the cohesive force that ensures the survival of this fishing community is refreshing, and a stark contrast to the individualist crusade that westernisation promotes but also a constant reminder of our Melanesian heritage and of the identity crisis suffered by the masses within the turbulence of rapid change and western influences.