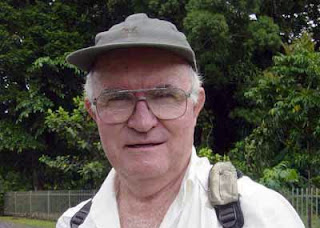 Morobe bush pilot Richard Leahy (pictured) has been moved out of intensive care in as pressure mounts on Morobe Governor Luther Wenge for refusing to apologise to him.

Mr Leahy, 68, was the pilot of the ill-fated Kiunga Aviation Cessna 185 that crashed in the rugged Saruwaged Ranges of Morobe province last Dec 30, killing six people, with Mr Leahy surviving but suffering burns to the most part of his body and rushed to Australia.

Wife Robin said at the weekend that Mr Leahy had been moved out of the intensive care unit in but was not out of danger yet.

“Richard is out of ICU, but not yet out of danger,” she said.

“He has a very long way to go, months probably, and there are ups and downs each day.

“However, the staff and facilities at the are fantastic and Richard is in the best possible place for his rehabilitation.

“We are all keeping our fingers crossed and sending positive thoughts and prayers for his continued recovery.”

Mr Wenge has been in the firing line after his threats to have Mr Leahy charged with manslaughter and deported from the country after losing family members in the crash.

Last week, Mr Wenge added more fuel to the fire by refusing to apologise for his remarks against Mr Leahy by saying he did not regret having said them, and said the plane was an old one and could have been replaced with the “millions” Mr Leahy had made.

People of and the world have taken offence at the Morobe Governor’s remarks.

“Cessna 185 is an old aircraft?” an Australian pilot said in an email.

“Some of us fly aircraft older than that that are in great shape!

“Aircraft are usually maintained to a much higher standard than your general ground vehicle.

“I guarantee you that Mr Leahy didn't intentionally crash his airplane and that if he'd of known it would happen, he would have tried to avoid it.”

Another said: “A new aircraft does not necessary gurantee safety, Mr Governor!

“Aircraft accident is the result of a chain of events.

“What if the people of PNG ask you to resign because hospital equipment is not renewed, maintained, or because the security force has not renewed arms and equipment.

“Remember, you could buy a brand new plane today and crash it if you fly into storm!

“Ask the Ethiopian airline pilot that crashed a couple of days ago in !