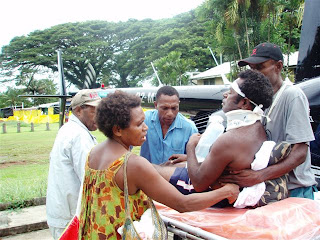 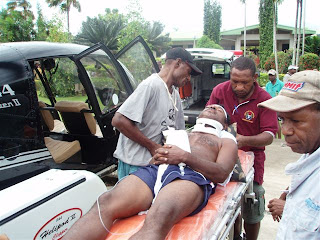 A banana boat travelling back from Madang last Friday evening capsized at Dungalow village beside the giant Ramu Nico treatment plant at Basamuk, throwing passengers into the sea.

Local headmaster Simon Douglas was pinned between the capsized boat and the shore, resulting in serious head injuries and a collapsed lung along with other possible injuries to the spine.

Mr Douglas was taken to the small aid post and treated by nursing officer Paul Konare, who managed to contact Kevin Murray who in turn contacted Sir Peter Barter, who went immediately to bring Mr Douglas, Mr Konare and Mrs Douglas back to

“Last week, I visited Karkar and witnessed numerous overloaded banana boats laden with cargo battling against two and three-metre chops, taking in water whilst the passengers continued to bail,” he said.

“Most of these boats do not have floatation, radios of locator beacons, no records are kept of the voyages, the number of passengers or other details pertaining to the type and colour of the boat and remain unlicensed.”

Sir Peter said at the weekend, , another boat  with a full family aboard was reported missing two days after it left Raikos for Madang, and relatives were concerned about the well being of the vessel and the occupants .

“Every year, we lose passengers and in most cases little can be done unless they are reported missing immediately,” he said.

“Their only hope is that they may drift to an island, providing the boat does not sink.

“In the case of the accident near the Ramu Nico project, one can only be amazed that such a large project has been constructed without road access, denying the people road access to Madang and forcing them to travel by sea.”

Sir Peter said he would again bring this to the attention of the company, Government and Department of Transport.