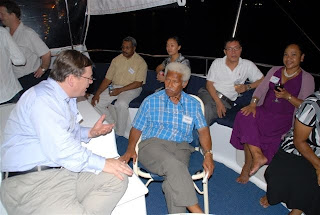 Mr Thursby along with Mishael Rowland, CEO Pacific, accompanied by ANZ Asia Pacific executive delegation, flew into Madang in their private jet for a stopover during which time they met a number of Madang people including Governor, Sir Arnold Amet aboard the Kalibobo Spirit and at a dinner that followed at the Madang Resort.