'Born to be a soldier' 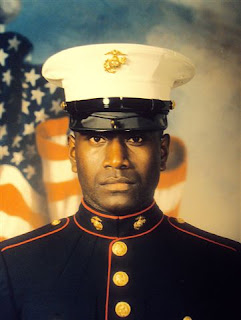 Granger Michael, the 25-year-old Papua New Guinean who was last Friday welcomed by president Barack Obama at the White House as a citizen of the as well as a US Marine Corps serving and protecting US interests and aspirations abroad, always displayed an interest in things military, according to father Graham Michael.

Mr Michael, a former Washington DC-based PNG diplomat whose father is from Dugulaba village on Manam Island in Madang province and mother from Pila Pila village in East New Britain province, is married to Celine from Guava-Dapera village at Panguna, Bougainville.

“We arrived in on post in mid October 1997 when Granger was just 11 and a half years old,” his father recalled today.

“Throughout his upbringing, while on post, he was very interested in all things military and that includes guns, tanks, airplanes and all sorts of military equipment.

“By age 13, his interest peaked and he decided to join the US Air Force's Junior Reserve Officer Training Corps (JROTC) at his school - Woodrow Wilson High.

“After his year 12 graduation, he joined the US Marine Corps as a fresh recruit at the Marine Corps training depot at .

“The 13-weeklong training in combat warfare is the longest in any military basic training and he eventually graduated with flying colours in mid 2004.

“After graduation he was transferred to his first unit at .

“ is the home of the ‘Marine Expeditionary Forces in Readiness’, the largest Marine installation in the east coast of US with over 40,000 Marines prepared for war deployment at short notice.”

Mr Michael said from there, his son was sent to on his first combat tour in late 2004.

“After six months deployment, he returned to and was again prepared for redeployment,” he said,

“He was deployed in in late 2006 for another six months stint.

“Throughout his three tours of duty, Corporal Granger was an infantry team leader with Golf Company, 2nd Battalion,8th Marines.

“He served in Fallujah, Ramadi and other theaters where his Company was attacked multiple times by improvised explosive devices (IEDs).

“Today, he remains in active duty and is assigned to Marine Barracks, as squad leader.”

Granger’s 23-year-old brother Leon S Michael, second born after him, is also serving in the US Armed Services as an electrical engineering specialist with the US Air Force.

He is currently attached to the engineering division at Travis Air Force Base near .