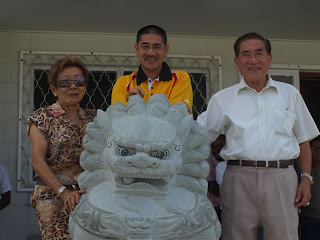 Hundreds of invited guests from and overseas are expected to converge on Kamkumung in Lae tomorrow (Saturday) for the opening of the new K65 million Lae Biscuit Company factory in Lae by Governor General Sir Paulias Matane.

The guest list reads like a who’s who of PNG business, government and politics who will be there to witness the opening of PNG’s largest single factory and the biggest stand-alone biscuit-making factory in the southern hemisphere.

Excitement is already building up among the Lae business community and people as they see this as an opportunity to shrug off some of the much-maligned ‘pothole city’ tag and to regain some of its lost glory.

It will be a special day for company founder and chairman, Sir Henry Chow, aged 76, a member of Chinese family that has been in the country for 115 years – spanning six generations - since its grandfather arrived at Kokopo as a coolie labourer under the German administration in 1895.

“The family has done very well over the 115 years from our coolie grandfather labourer to come to this stage,” an emotional Sir Henry told reporters in his magnificent new boardroom.

“It has not been easy.

“The family has been through two world wars.

“With a coolie labourer background, we have been discriminated against by the Germans and then the Australians.

“Our parents have sacrificed and educated all their children in , who have returned to PNG to run little boats, little trade stores and little plantations.”

“It was a very small factory, making a quarter tonne of biscuits a day,” he recalled.

Asked what his secret was, Sir Henry revealed: “Determination and will because I want to make good.

“My grandparents on both sides instilled in me that they were discriminated against and we have to work hard to become a success.

“That has been ringing in my head all these years.”

Tomorrow, a dream comes true for Sir Henry and the Chow family, as they shrug off a stigma that has haunted them since their grandfather first set foot on PNG shores all those years ago.