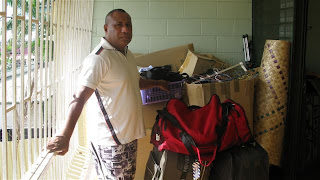 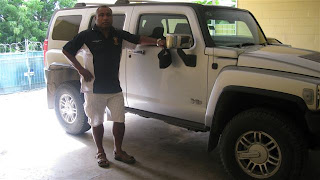 Former PNG Defence Force commander Commodore Peter Ilau has broken his silence over “highly-defamatory” allegations in The National that he was responsible for emptying Flagstaff House – official residence of the PNGDF Commander – of all its contents.

He also explained why he is holding on his contract vehicle, a Hummer bought from Boroko Motors, following scathing accusations leveled at him by another former PNGDF commander Major-General (rtd) Jerry Singirok and unnamed sources.

New PNGDF commander Brig-Gen Francis Agwi is reportedly unable to move in to Flagstaff House because it is empty and the PNGDF has no funds to replenish.

A visibly-distraught Commodore Ilau said at the weekend to the three-bedroom unit at Gordons which he is renting to check out if he had indeed “stolen” the contents of Flagstaff House including furniture, white goods, curtains, cooking utensils, cutlery, chinaware, lounge chairs and other goods.

He was flanked by his daughters, who said their and their mother’s safety was now jeopardised, because of accusations about something they had never done.

He said he and his family vacated Flagstaff House – which they had occupied since Nov 2001 - on Jan 29 this year straight after the formal handover and takeover parade for the PNGDF commander.

“Keys were handed back to staff the same day,” Commodore Ilau said.

“The exit from the house followed normal procedures.

“A final inspection and checks were carried out by appropriate staff including the military assistant to the commander PNGDF, who was also present at the time prior to actual departure.

“Five PNGDF personnel were present to witness me and my family’s departure.

“The house was intact with its normal inventory items upon departure, witnessed by appropriate staff.”

“Upon moving in in October 2001, all items in Flagstaff House were completely rundown,” he recalled.

“The house itself was also rundown and medically unfit.

“Whilst those residences were accorded some form of renovation or upgrade. Flagstaff House did not enjoy any of that.

“It was only attended to on essential need basis by its tenants.

“This was basically to avoid the misperception of denying troop’s conditions of improvement.”

As far as Commodore Ilau’s contract vehicle, he says: “Firstly, it is not a support vehicle.

“It is a vehicle entitlement as per my category B State contract.

“This also includes my housing allowance.

“As is the past and current practice, it is normal for a commander, commissioner or departmental head, particularly Contitutional office holders, to have the choice of retaining their contract vehicle.

“In this case, my staff wrote to Transport and Works departments in Dec 2009 to commence the process of transfer of ownership.

“The Transport Department has advised on the depreciation rate of the vehicle on a monthly basis.

“I, being still a serving officer, continue to use the vehicle while awaiting proper invoice, and also my own retirement entitlements to sort out the appropriate payments to complete the transfer process.

“Hence, the depreciated value will be calculated from the purchase price plus the number of months of previous usage.”

Commodore Ilau and his family are currently residing in a three-bedroom flat at Gordons, paid for out of his own pocket, at a cost of , 500 per week.

He said the PNGDF had failed in its obligation to pay for his three-month transition as normal for outgoing PNGDF commanders, which allowed them to prepare for their final settlement of choice.

He has so far paid three months of accommodation which will expire at the end of April 2010 while PNGDF has yet to respond as obligated, and continues to wait patiently despite Defence Council assurance through the Minister for Defence

In the first five days of departing Flagstaff House, Commodore Ilau and his family were on the streets; however, with the intervention of “some good Papua New Guineans”, he managed to move into a flat on the sixth day.

“More dramatic was the fact that the original cheque issued for my transition rentals was cancelled and put to a stop by Defence Secretary Fred Punangi immediately the next day.

“To this day no reason has been given for the continuing delay.

“The National Government has yet to decide on my future deployment.

“Appropriate letters to the Secretary for Personnel Management, Chief Secretary and Treasurer have not been answered.”