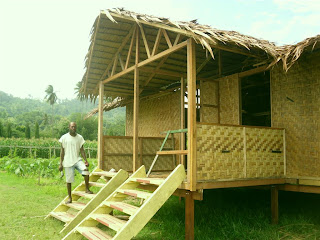 Caption: A model resource centre being built at Bubia near Lae for the 2010 agricultural innovations show next Wednesday

Story and picture by JOSEPHINE YAGA of NARI

Community-based resource centre, a concept promoted by National Agriculture Research Institute as a ‘one stop centre’ for information exchange and knowledge sharing at village level, will be showcased at Bubia near Lae next Wednesday (May 5 2010).

This will be a highlight of the 2010 Agricultural Innovations Show organised by NARI at its headquarters at Bubia.

Chairman of show organising committee Dr John Bailey said a model resource centre would be on display fully equipped with information and resources that would be made available to some 50 centres throughout the drought vulnerable regions of PNG under a new project.

Farmers and development partners are invited to see the centre and hear from NARI about the concept which can support extension and information dissemination in rural PNG.

NARI is promoting the concept to facilitate information exchange and technology transfer in rural areas in which farmers can have access to new and improved technologies and innovations, which can help them improve their farming practices and thereby enhancing their food security, increased income earning opportunities and improved welfare.

The rationale is to bridge the gap between farmers, communities and researchers, and help empower farmers and their communities with improved skills, techniques, materials and knowledge for decision-making.

The model centre is being developed as part of NARI’s national drought preparedness project funded by the Government.

The project is titled ‘Preparing rural communities for frequent and prolonged El Niño-induced drought events’, and will be launched during the show.

During the show, the model resource centre will be fully contented with demonstrations and information on drought coping strategies both indoor and outdoor. Indoor exhibits will be on food processing, preservation and storage.

Although this will be done for agricultural development and disaster management, the idea is that the centre can also be used for health, education, law and order, and other issues of significance to community development.

The resource centre concept is a new initiative and innovative approach being proposed by NARI in order to find alternative, cost-effective and efficient ways of reaching and linking people to address the core challenges of information exchange, technology adaptation and transfer, and innovation by farmers.