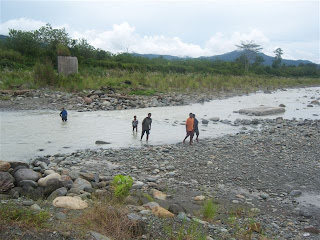 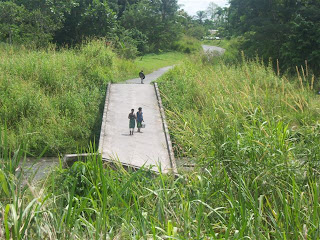 By SOLDIER BURUKA of Department of Agriculture and Livestock

needs about K500 million to rebuild infrastructure facilities including bridges and culverts that were destroyed during the 2007 Cyclone Guba.

Member for Ijivitari and Vice-Minister for Education, David Arore, called on the Government to provide major funding for rehabilitation and restoration of basic infrastructure and communication services and to return the province to normalcy.

He said the Northern population of 135,000 had contributed to the overall development of the country and deserved better treatment from the Government.

He said up to K500 million was needed to be spent on repairing and building permanent infrastructure facilities and services in the cyclone-devastated province.

Amidst loud applause from the public who watched the formal opening, Mr Arore said people’s everyday livelihood was affected due to inaccessible roads, damaged bridges and culverts, inadequate communication, limited air transport services, high cost of transport and other constraints.

He said farmers were finding it difficult to transport their agricultural produce to markets, small businesses were collapsing and essential government services were not reaching the people.

He called on the authorities to ensure that permanent infrastructure was put in place and “not half baked” or temporary facilities which needed repairs and regular maintenance.

“Oro people have served this country in many ways and deserved better treatment from the government.

“We want development to come into this province.”

Mr Arore proposed that a road be built to connect Popondetta through Safia and Kokoda to Kupiano in the Central province in light of the LNG and economic growth predicted in the near future.

He said Oro was blessed with many natural resources but it lacked adequate infrastructure facilities to move the province forward.

The delegates attending the forum were taken on a tour of the damaged bridges and culverts along the and towards .

CIMC executive officer Ms Marjorie Andrew, in her opening remarks at the start of the session, said the forum was to discuss a range of important transport and communication issues facing the Southern Region provinces of Oro, Milne Bay, Central, Gulf and Western.

She said the theme “access to adequate transport and communication infrastructure and services: the vital links in the development chain”   was appropriate and timely.

Ms Andrew said the transport sector was said to be the forgotten link in the development chain.

“It has provided the backbone for the social and economic development of ,” she said.

“The importance of transport is often only recognised when it doesn’t perform or when disaster occurs.

“Investment in the country’s road networks, ports and airports is necessary for facilitating growth in the economy.

“Increases in freight and passenger movements have provided the platform for rapid growth in other economies – which have resulted in real increases in wealth and living standards.

“Despite the fact that there have been huge budget appropriations for transport, there is a need for significantly more investment over the next few decades in PNG.

“Adequate transport and communication is essential for the well being of everything in the development chain.

“As the transport system deteriorates in PNG, not being adequately maintained and unable to take the increased demand, we do feel the effects of a failing infrastructure.

Ms Andrew said she was sorry to see the many bridges that had been washed away along the and even more disappointed that little had been done to repair and replace these bridges along a designated national road that has the Northern Province Restoration Authority set up to fix it.

“Just imagine the impact that has had on the social and economic life of Sohe District and even the province.

“In order for PNG to compete in world trade, we must have adequate infrastructure in place to enable our businesses to compete.”

Ms Andrew said the large increase in global trade and services that was forecast would require new transport corridors, efficient handling and logistics services, and increased mobility of labour, goods and services, as well as reduced time and costs.

“We are facing a serious dilemma here, and need to give political and financial priority to transport and communication infrastructure and services.”