Pirates get a lifeline from Bismark Maritime 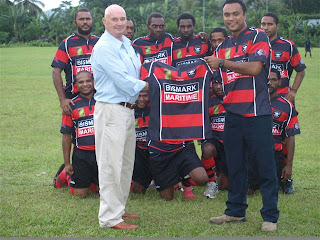 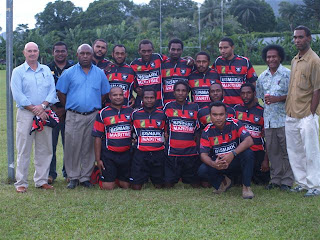 The company has supported Pirates for the last seven years with two sets of jumpers and this year will be the eighth year running.

Bismark Maritime marketing manager David Black was at the SCRUM Oval at the Lae Showground last Friday to deliver the two sets of jumpers to the buccaneers.

“This year, we’ve gone for a new design with new materials, in traditional read, white and black Bismark Maritime colours, which are also the colours of Pirates,” he said.

“It is my privilege and honor to accept these brand-new quality jerseys on behalf of the club and its supporters, and I would like to thank Jamie and Julian Sharp and Bismark Maritime shipping company for its ongoing support in ensuring we are fully kitted for another season,” he said.

“These jerseys are much lighter than our previous set, and will boost out team’s image and our efforts towards winning the competition this year.

“We can assure you that we will take good care of them and wear them with pride and dignity throughout the competition.”

Minor sponsors are Designscope Architects, who are sleeve sponsors.

Pirates have made some strategic improvements to management this year including appointing John Posanei as president, backed by Varcilli as secretary, Maurice Owen as fundraising chairman and Sonny Songake as club treasurer.

On top of that, the Pirates have former representative player Ephraim Tavua, who is also a qualified and very-experienced coach.

Meanwhile, Chemcare Defence spoiled Bismark Maritime Pirates’ celebration of their new uniforms with a late comeback from behind to win 10-7.

Hornibrooks Harlequins opened their season on a high note with a closely-fought 14-13 win over Dulux Viking Dogs and Riback Unitech Reds nailed an under strength reigning champions Consort Reds 22-0.