A gift from the heart of a child 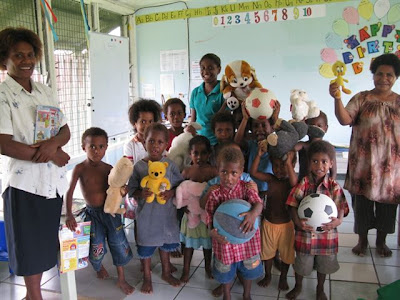 A little school girl selling her belongings to help other children with their education is a rare sight for many.
Eleven-year-old Tulani Suitawa, a grade six student at Sacred Heart Primary School in Rabaul recently raised and donated K200 and other items to the recently-established Honey Bee Play School of PNG University of Natural Resources and Environment.
It was not known to many, why the youngster spent a Saturday afternoon two weeks ago behind the university mini-mart selling her old school bags and bilums; and clothes and shoes she had grown out of.
After the sale, Tulani told her family her intention to donate her old toys to children at the Honey Bee Play School.
She and surrogate sister Lamella packed the toys and other items, which Lamella delivered to school committee chairperson, Naomi Gioven.
Mrs Gioven, however, insisted that the donation was special and requested that Tulani personally present the items to the children, so Tulani and her family went to the school to make the presentation.
Apart from donating the soft toy collection that she amassed since she was born, Tulani also donated two soccer balls, two basketballs, her entire collection of crayons and colour pencils, pages from her old exercise books and magazines for the children’s arts and craft class.
She also donated a box of band-aids and cotton balls towards the school’s first aid kit.
During the presentation, she and Lamella also presented the K200 that they had made from the sales of their second-hand items to Mrs Gioven.
They had made K100 each that day and had decided that children at the school needed it more.
Mrs Gioven, who appreciated the assistance, described it as timely.
She said for a child to give at an early age was a challenge for many adults.
Mrs Gioven said: “Many of us are at the receiving end; we do not want to give, even if it is finance, love or respect. Life is all about giving.”
She said when it came to helping others; most people looked outside for bigger donations.
“Little Tulani’s donation shows us that we can make things happen with what we have,” she said.
Mrs Gioven has since written a formal letter to Tulani, on behalf of the school committee thanking her for her gesture.
It is the youngster’s first important letter and she has placed it carefully amongst her other prized possessions.
Tulani’s mother, Lythia, expressed pride at her daughter’s act of kindness.
“At first I didn’t really take notice of what she and Lamella were doing. My husband and I are always giving so it just seemed natural that Tulani would do something like that. Not really worth a fuss,” she said.
“It wasn’t until Mrs Gioven and other members of the Honey Bee school committee expressed their appreciation that I realised how truly a selfless act it was, especially for a child. Like any mother I am very proud of her and of Lamella for putting others before themselves.”
Ms Suitawa said, however, that the donation also taught her daughter a valuable life lesson.
“On the day Tulani made the donation, she didn’t know that as she was giving away four balls, two new soccer balls had already been bought for her. Not just any soccer ball but the one she had always wanted, with pictures of soccer greats on it,” she said.
Tulani’s father had bought the balls before he heard that she was giving away her toys.
“Through her small donation Tulani learnt that God does bless those who give. She sold her old clothes and shoes, gave away most of her toys, crayons and colour pencils but is now eagerly looking forward to receiving not one but two new soccer balls that she thought she would never have,” Ms Suitawa said.
When asked what prompted her to make the donation, Tulani said it was because she wanted to help the children.
“I am always reminded by my mother that I am blessed to have the things that I have so I wanted to share with other children,” she said.
“It wasn’t really hard to do because giving is a way of life in my family. My grandparents are always helping others and at home I see my parents give all the time, even to people we don’t know.”
Tulani said it made her sad to part with toys that had been with her since her earliest memories, but she knew that she did not need them anymore.
“I’m older now so the children will appreciate them more. That makes me happy,” she said.
Tulani said, however, that her biggest satisfaction came from making her parents proud of her.
“My father called just to say he was proud of me and my mother couldn’t stop smiling so I was glad Lala and I made the donation.
“It proved that what my parents do and want to teach me is true. It is better to give than to receive.”
Posted by Malum Nalu at 5/30/2010 06:26:00 PM