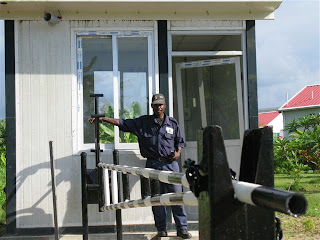 A second access boom gate (pictured)  is being constructed at the Vudal Campus of the University of Natural Resources and Environment.

The gate, which is located at the campus’s , is a security measure to monitor and control access to the campus by vehicles as well as pedestrians.

It is also being constructed to provide a safe and peaceful environment for all campus residents.

The access gate will be manned 24-hours a day by university security personnel.

Acting estate and services manager Mike Ambrose said this step was taken following numerous concerns raised by staff residing at the village on speeding vehicles, vandalism and stealing at their residences.

Mr Ambrose said all vehicles including university vehicles would not be allowed to enter the university through after hours (4:06pm) and on weekends.

All vehicles must use the main university gate during those times.

Once completed, Mr Ambrose said the current access gate near the monument, would be permanently locked.

Meanwhile, many campus residents have raised concerns about vehicles travelling at high speeds within the campus.

Suggestions offered to control this also include speed limit signs at the main gate as well as within the campus and spot checks by security personnel on offending drivers and their vehicles.