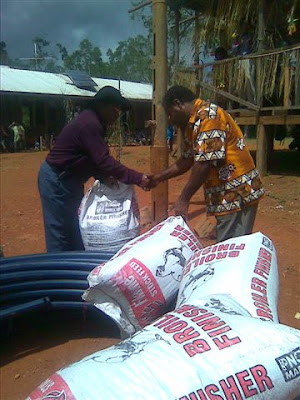 Manus MP’s staffer Hubert Molean handing the projects over to the Tetidu LLG president Peter Poiou (with cap) at ground.-Picture by ROSELYN ELLISON.

Speaking at during the launching of four agriculture projects recently, Tetidu LLG president, Peter Poiou said his LLG was focusing more on economic development so that people would work on their land to generate income.

The four farming projects were funded under the Manus district support improvement programme (DSIP), with a total funding of K155, 833.00.

A total 334 local farmers within the Tetidu LLG are benefiting from the projects.

“We want these 334 farmers to pilot the projects,” Poiou said.

“You must look after these projects so that they will sustain you in the long run.

“You must work your land.

“There is no time for politics.

“Let us work together to develop our LLG.”