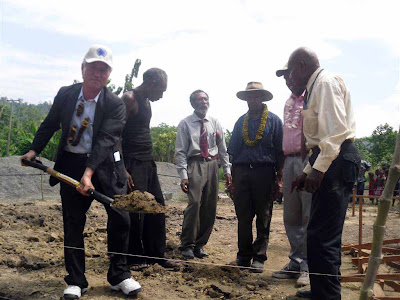 Prof Jeon Un-Seong of Korean government does the ground breaking of a new eco-lodge at Gabensis village outside Lae last Friday as NARI staff and local leaders look on.-Pictures by SENIORL ANZU 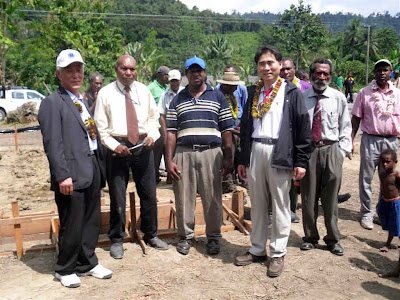 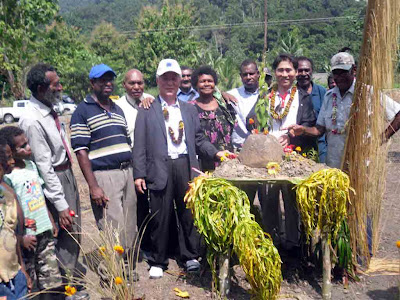 
By SENIORL ANZU of NARI

Gabensis village in the Huon district of Morobe will be the first in the Pacific to try out a new village movement concept, focusing on agricultural and eco-tourism development, courtesy of the Korean Government.
The pilot project will include the construction of a yam-based tourism facility known as Saemaul Eco-lodge and production and processing of yams.
This is a cooperation project for rural development between Korea and Papua New Guinea, facilitated by Korea’s Kongwon National University and PNG’s National Agricultural Research Institute (NARI).
Last Friday (May 28, 2010), a groundbreaking ceremony was held at the project site at Gabensis to kick-start the construction of the eco-lodge.
Gabensis is located about 5km after the famous Markham Bridge, along the Wau/Bulolo road.
The Korean government, through the ministry for food, agriculture, forestry and fisheries, is investing a total of US$58, 900 in the new initiative which is expected to bring positive developments in eco-tourism to the district and the province.
The ground breaking was done by Prof Jeon Un-Seong, president of foundation of agricultural technology, commercialisation and transfer under the rural development agency of the Korean Government.
The ceremony was witnessed by Wampar LLG president Peter Namus, provincial tourism officer Joe Kevere, project coordinator Sam Ifid, agro-tourism board chairman Bill Naeman, ward councilor Francis Paul, representatives from NARI and Bris Kanda, village leaders and the local community.
The eco-lodge will be used by tourists, who will also spend their money on yams planted and processed at the lodge site by the local community.
Prof Un-Seong said PNG had a huge potential in various fronts of tourism, including eco-tourism.
He called on Gabensis villagers to have a dream and work towards achieving it.
“We are doing small for you.
“We are giving you a seed.
“You can build a big hotel in your village,” he said.
Prof Un-Seong, who is a top agricultural economist with the Korean government, said 30 years ago, Korea was poor, worse than PNG.
But with a dream, people have worked hard to realise changes and today Korea is a well-developed country, being the seventh-richest in the world.
“Similarly, you can do that same, given the vast resources you have,” he said.
Prof Un-Seong said once the facility was developed, it could be promoted internationally to attract tourists.
He added that the Gabensis Eco-Lodge should aim to catch the estimated 900 million tourists that travel the world every year.
The project was well received by the community.
Mr Namus assured his full support towards the project, as long as he was the president of Wampar.
He said development did not come by sudden fluke in big ways and challenged the community not to have high expectations but look after such small projects as they made a lot of differences. Mr Namus also said it was good betelnut had died out in Morobe and this had now opened people’s eyes to work hard and tap into new and innovative economic development activities.
NARI representative Mr Elick Guaf said as a partner, the institute was happy to be involved in all the three aspects of the project in supporting the Korean Government and the Gabensis community.
He said the village movement concept was new for NARI, PNG and the Pacific, adding that the success of this project would be important for PNG.
He said the three components would see the establishment of a three bedroom eco-lodge, production of yam and processing of yam – all would be done at the project site and would involve the Gabensis community.
Mr Guaf said a lot of PNG food was perishable and the project would look at food processing and preservation which would also address value-addition and food security needs.
He challenged the community to take the initiative as a gift and look after it.
Saemaul means “new place” in Korea. Prof Un-Seong has done similar projects in Cambodia, Laos, Vietnam and Tanzania with the mission to alleviate poverty through eco-tourism.