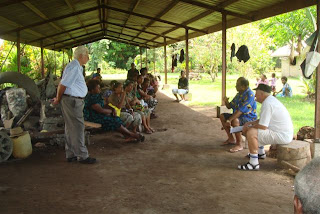 The move, which is being initiated by the Kokopo Historical and Museum Society, has received the support of Papua New Guinea Orchid Society patron, former Prime Minister Sir Rabbie Namaliu.

More than 25 people from around the province attended a recent meeting in Kokopo to discuss the initiative (pictured above).

They have agreed to meet again on June 26 to elect the society’s executive members.

Sir Rabbie, who was also present at the meeting, said he wel­comed the move to revive the orchid society in the province.

He recounted his experi­ences with the PNG Orchid Society and highlighted the many advantages of being or­chid society members.

Sir Rabbie said the ENB society could also establish an annual orchid show in Kokopo, similar to the one held in each year.

Those who attended the meeting, which included 17 staff of the University of Natural Resources and Environment, welcomed this proposal and are looking forward to the June meeting to further the initiative.

People who are interested in being part of this society should call Kokopo Historical and Museum Society chairman Neville Howcroft on (675) 983 9144 or secretary/treasurer Werner Arnes on (675) 982 8447.