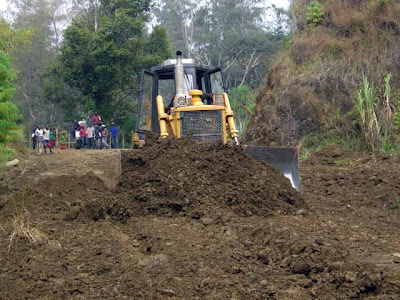 A bulldozer clearing and expanding section of Fayantina road in Fore community area, which has deteriorated to almost inaccessible, even by four-wheel vehicles. Picture courtesy of HENZY YAKHAM

Recent commencement of a K15 million major road upgrading work on the Fayantina road in Henganofi district, Eastern Highlands province has resuscitated the local economy with increased agricultural, farming, trading and transport business activities.
The road works started last month (May 2010) on the over 36-kilometre road from Henganofi station along the Highlands Highway and will continue to the Okapa and Lufa road junction, which connects the two neighbouring districts of the same name.
The current dry season in the area has enabled work to progress very well and work is taking place in the Fore area, halfway between Henganofi and Okapa-Lufa road junction.
With improved road conditions, the volume of traffic along this road has dramatically increased as more and more people take the opportunity to transport their coffee, fruits, vegetables and other garden produce to markets in Goroka, along the Highlands Highway and Lae, Morobe province.
Henganofi MP Ferao Orimyo undertook this road project as one of his priorities since elected in 2007 general election by providing K1 million in counterpart funding to successfully secure funding from the Asian Development Bank.
This road serves over 20, 000 people in the Fayantina Local Level Government area of Henganofi as well neighbouring Okapa, Lufa and Kainantu districts.
A similar amount is to be spent to upgrade the 30-kilometre Dayantina road, which starts near Henganofi station and ends in the Ramu Sugar area in the border region of Eastern Highlands and Madang provinces.
Mr Orimyo has urged people in his electorate to return to their coffee plots to produce more coffee and other agricultural produce to earn money.
He also urged the people, particularly young people not to waste time gambling and other unproductive activities, but grasp the opportunity to work their land and enjoy the benefits.