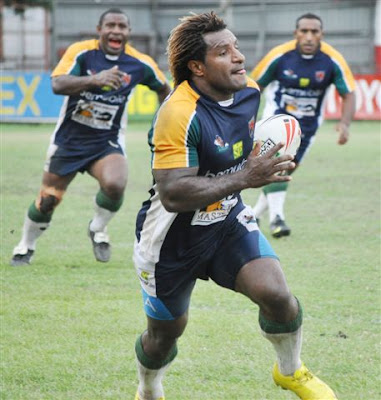 COMPETITION leaders SBS Mendi Muruks are primed for a tough clash against Masta Mak City Rangers in round eight of the bemobile Cup on Sunday in Lae, The National reports.
The Muruks are coming off a gutsy one-point win over the  Kongo Coffee Warriors 13-12 in Kundiawa last week and will be determined to maintain their lead on the table with a win at home .
Muruks are leading unofficially on 11 points, while defending champions Agmark Gurias are on 9 points, Toyota Enga Mioks and Rangers both on 7 points, Warriors and Bintangor Lahanis both on 6 points while ACTL Bombers are on 4 points.
New comers Wantok System Gaming Mt Hagen Kuris have not registered a win yet.
The game between the Muruks and Rangers is easily the game of the round as both teams have the exciting players who have produced free-flowing rugby league over the last month.
“We will not take Rangers lightly on our turf. They have  the advantage in experience  but that won’t deter us. The boys are ready for this game,” secondrower Norbert Kembo told The National yesterday.
The Unitech second year lands and surveying student, who has been in devastating form, will be the chief  weapon for the Southern Highlanders in both defence and attack.
Kembo, who scored a try in last Sunday’s game against the Warriors, will get much support from captain Joseph Omae, Paulus Mondo, Jackson Undi and Jacky Kuman who will set the foundation for their backline.
The backline will have nippy halfback Steven Kua and the composed Ate Bina Wabo, who have combined well with centres Bobby Akopa and Wesley Benny, while the experienced finishers in Elijah Anton and Sova Milfred are expected to cause  havoc for the visitors.
But Rangers, the team with the never-say-die attitude, will certainly not bow down to Muruks.
The Rangers have recently bounced back into the winners’ circle and are expected to field the team that drew 28-28 last Sunday against Mioks in Wabag – which was no mean feat.
Franchise owner Kelly Aiyok is optimistic that his side will fulfill the mission – topple the competition leaders at home.
They have the experience in Kumuls Simon Young, Nathan Anjo, Ham Tee, Anton Kui, Johnson Kuike and Captain Francis Ray to pull off the upset against the “Naikos”.
Aiyok is expecting his Rangers to come away with two valuable competition points.
Both teams have a high work rate in both defence and attack and it seems the the result will depend on the obvious.
Which side  makes the least errors and holds  on to the ball.
Posted by Malum Nalu at 6/25/2010 08:14:00 AM