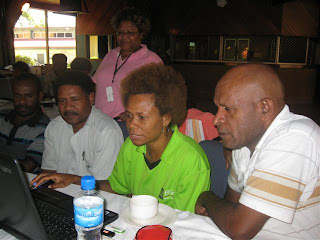 By AUGUSTINE DOMINIC of CIC

The Coffee Industry Corporation can effectively deliver its services right down to coffee farmers and stakeholders in the districts level with a new business plan drawn up recently.

Chief executive officer of CIC Navi Anis said during the closing of a two-week planning workshop in Lae last week that the plan highlighted specific issues that CIC needed to prioritise and design projects to implement the needed service.

He said the business plan translated the revised PNG Coffee Industry Strategic Plan (PNGCISP), 2008-2018 to achievable and measurable objectives and projects for implementation.

The plan targets both the remote and accessible areas of that grow either Arabica or Robusta coffee.

Depending on project priority and funding, CIC aims to improve its services to the districts under the six main thematic areas: productivity; scale of production; marketing systems; information and communication; legal and policy; and capacity building.

Workshop facilitator Dr Simba Simbanda encouraged the participants, especially from CIC, to believe in themselves and take ownership of the plan in order to implement it and achieve the desired results.

The workshop was funded by the Australian Research and Development Support Facility (ARDSF) via AusAID and is a follow-up of various other workshops being held since 2009 and early 2010 to translate the PNGCISP into achievable plans.

Manager for CIC’s industry regulation and compliance Sam Menaga said such knowledge was offered at university level and was gained over a number of years, however, he was fortunate to be part of the process.

CIC board director James Korarome shared similar sentiments and encouraged CIC staff to work together to being the services to coffee farmers and other stakeholders.

“When I was outside, I complained a lot that CIC was not doing much for the coffee farmers in the country, but since I became involved in the programme planning process of CIC, I can understand the constraints that CIC faces to deliver its services,” he said.