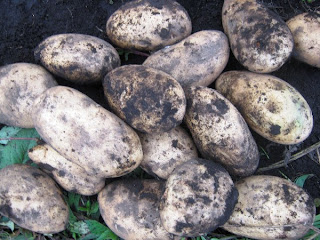 Caption: Tubers of NP 02, one of the PLB-resistant varieties pre-released by NARI to the farming community early this month – Picture by ANTON KERRU

THE farming community now has the opportunity to trial new potato varieties after the National Agricultural Research Institute (NARI) officially made a preliminary release of two varieties resistant to the late blight.

The varieties referred to as NP1 and NP2 (NP stands for NARI potato) were pre-released during the agricultural innovations show early this month along with a broiler feeding system and two cold-tolerant rice varieties for the highlands.

The preliminary release of the two varieties will be sigh of relieve to smallholder farmers who have been unable to grow the crop after it was completely wiped out by the potato late blight (PLB) disease in March 2003.

The potato industry worth about K25 million at that time has not recovered fully as the common variety Sequoia is still very susceptible to PLB.

After the outbreak caused by a fungal agent, Phytophthora infestans, the Sequoia variety could not be grown by ordinary farmers due to the cost of weekly fungicide treatments.

The Sequoia is highly susceptible to the late blight and potato production has been limited to a relatively small number of commercial farmers who could afford chemicals, backpack sprayers and seed potato.

Subsistence farmers, particularly in the highlands where the crop is usually grown rely on potato as an important crop.

Potato is not only a commercial crop but is also a source of food next to sweet potato (kaukau), particularly in the high altitude highlands where the choice of staple food is limited.

In a view to revive the industry, particularly the smallholder farmers in mind, NARI initiated a project in 2003 with funding support from the Australian Centre for International Agricultural Research to evaluate blight resistant varieties.

The objectives of the project were to introduce, multiply, evaluate and deploy late blight resistant clonal material into PNG and to develop safe, cost effective integrated late blight management strategies for existing and new potato cultivars and ultimately to rehabilitate potato production for smallholders.

Under the project, NARI sourced 59 International Potato Centre (CIP) clones in 2003 and evaluation work has been undertaken at various sites to asses late blight resistant and yield.

Of the 59 clones, 12 clones where selected and further evaluated against Sequoia both on station and on-farm.

The two varieties pre-released have proven to be late blight-resistant, high yielding and have other favorable agronomic traits such as good taste and processing quality.

The pre-released varieties have been subjected to a wide range of farmers and general public for their comments and views, both at the growing and harvesting stages.

Many farmers have already shown their approval and are into growing them, including seed production.

The Enga rural potato project based in the Lagaip-Pogera district, an initiative of its local Member of Parliament has ventured into seed production with a view to reviving the crop in the district and the province as a whole.

This is seen as a good initiative as the adoption of new potato varieties by farmers depends on the availability of a consistent supply of quality seed potatoes.

The late blight disease remains a concern to the potato farmers, especially in the highlands where the crop is popular and usually grown.

The fungus is a specialised pathogen of potato and is an extremely-destructive disease of potatoes.

It was responsible for the devastating Irish potato famine of the 1840s and has continued to be important to the present.

Since the Irish famine, late blight became the most-studied potato disease in the world.

Previously free of the disease, PNG was one of the world's few remaining safe havens for growing potato until 2003.

The entire potato crop was wiped out in a matter of weeks after it was first discovered in the Sirunki area of the Enga province leaving a trail of destruction.

The blight is believed to have come across from the neighboring Indonesian province of Irian Jaya.

Yield losses caused many smallholders, who relied on potato as a valuable cash and food crop, to withdraw from production, leading to an increase in potato prices in the country.

Some breakthrough has been made to control PLB using fungicides, however, the extra input has been a burden to smallholder growers and identifying suitable varieties was the long lasting solution to revive the potato industry.

NARI with support from other partners have taken on this responsibility and the preliminary release of the two varieties is an outcome of the efforts to assist smallholder growers and to reviving the once-thriving industry.

It is now hoped that smallholder farmers will now be able grow their favourite crop once again with the preliminary released materials as additional inputs requirements associated with the Sequoia variety has denied them.

The preliminary release of the blight resistant varieties is a breakthrough against the devastating potato disease and it is now up to the farming community to try the varieties in their farms and adopt them from their own judgments.