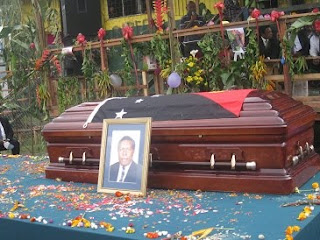 Captions: Teine goes home...Martin Teine (white shirt) and mourners from his Endugla tribe awaiting the casket containing the remains of his late dad, Joe Mek Teine, as it was brought from a chartered plane. The casket, received by acting Prime Minister Sam Abal, was later taken to the Dicksons oval for public viewing.-Nationalpics by ZACHERY PER

THE late Chimbu politician Joe Mek Teine has been described as a leader who stood up for the grassroots people, The National reports.

President of PNG Law Society Kerenga Kua said yesterday that Teine was a man who forfeited so much of his own career development to stay back in Chimbu to serve his people as an informal leader until he was elected in the 2007 national elections.

Teine was a former lawyer, member of Kundiawa-Gembogl and Constitutional and Law Reform Commission (CLRC) chairman at the time of his passing.

Teine began his career as a lawyer, practising as a prosecutor and later as a private practitioner establishing Joseph Mek Teine Lawyers in Mt Hagen and Chimbu from 1989 to 1994.

Kua said the late Teine's expertise and wisdom as a lawyer were immediately recognised by the government when he was appointed as CLRC chairman.

"Teine immediately used that position to initiate a review of the Sorcery Act which has been overlooked by successive leaders as unimportant."

Kua said: "But Teine saw that sorcery was one issue that was undermining the social fabric and human capital of this country.

"He also saw it as an institutional abuse of basic human rights against the weak and defenceless members of PNG society. Teine made it a priority to have a nationwide review with the goal of strengthening the Act.

"It was in the midst of this review that he passed away. It is a tragedy to the people of PNG, especially those underprivileged members of society, who have, in the past, and will in the future; suffer, as a result of our brutal belief in sorcery."

Kua said the legal profession had been very proud of the fact that it had produced leaders in so many key government departments and the public and private sector.

"The PNG Law Society takes this opportunity to convey its condolences to his wife Dala, his children Emmanuel, Julianne, Johnny, Quina, the Enduka tribe and the people of Kundiawa-Gembogl, Chimbu province," Kua said.