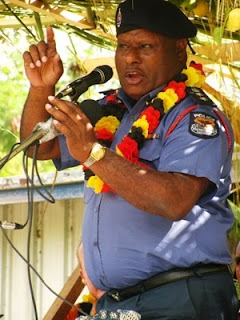 Caption: Peter Guiness laying down the law on yesterday

The basic cornerstone to a peaceful and law abiding community begins in the family unit.

This was the challenge Morobe provincial police commander, chief superintendent Peter Guinness laid down for the people of Mumeng in the Bulolo district who had gathered to witness the launch of their district bulldozer in Bangalum yesterday.

Guinness provided the response following comments from the crowd wanting to ascertain what police action had been taken regarding the weekend ethnic outbreak and other law and order incidents over the last few months.

According to Morobe's top police officer, lawlessness in society was a responsibility for every citizen in any given locality and should not be thrust upon law enforcement agencies alone.

Following the two deaths that came about as a result of payback intentions, Guinness urged the crowd to seriously think in terms of the consequences of any actions or thoughts prior to carrying them out.

"Think about your family before you give in to the pressures of other people or joining other groups.

"Ask yourself who will look after your sons?

"Who will take care of your wives and care for your daughters before deciding to join unlawful activities?"

Guinness said the most- recent ethnic situation and the many other similar incidents seen in Bulolo were a result of youths not having respect for the law and for society at large.

"Where do these values start?

"They start with you and me as responsible adults, we have the responsibility to teach them – our children and young ones - the values of respect for society, respect for the rule of law and respect for life."

Referring to the two deaths, Guinness urged the people not to waste their lives in vain for something that could so easily have been avoided had the two men not tried to payback or get involved.

He said it was very clear there was a shortage of police men and women across the country and therefore urged the people to take it upon themselves to do the right things and exercise more responsibility starting in the home and family in order to give themselves and the communities they lived in a chance for the better.

"We are our own worst enemies.

"We create incidents and expect the police and other law-enforcement agencies to fix the problems that we have failed to be proactive about.

"If we are serious about maintaining the rule of law and order in our societies, then we should start in our homes, our clans our tribes and our communities now."